Today’s set of Disney Paper Parks printable activity sheets is filled with holiday spirit! Focused on Town Square at Disneyland park, this second set in a three-part, holiday series of Disney Paper Parks includes instructions to create a 3D version of Town Square with garlands, wreaths, a Christmas tree and a popcorn cart and fire engine that can double as ornaments.

Pair your paper Town Square with the prior Disney Paper Parks releases of Main Street, U.S.A., Sleeping Beauty Castle and King Arthur Carrousel to expand your paper version of Disneyland park! Extra garlands and wreaths can be printed out to give your paper park a holiday overlay.

For best results, we recommend printing the activity sheets at their actual size, not scaling them to fit the page. We also recommend adult participation or supervision for those with little ones to help make this great activity even more enjoyable.

Disney Paper Parks was created for the Disney Parks Blog by Imagineers Stephanie Jazmines and Amy Young, and requires the use of scissors, glue, folding along dotted lines in specific directions and your creativity!

By downloading Disney Paper Parks, you acknowledge and agree that these materials are being provided to you for personal, non-commercial use.

Today, you can complete your Disney Paper Parks of Main Street, U.S.A. and the “Magic Happens” parade with the release of part two of Disney Paper Parks. Once completed, know that we have more printable, 3D activity sheets on the way, and in the meantime, enjoy moving the floats down your parade route at home as pieces of moving art!

When Imagineers Stephanie Jazmines and Amy Young designed Disney Paper Parks for the Disney Parks Blog, they wanted to remind guests how big of an opportunity a blank sheet of paper can be. If that sounds familiar, it was a mantra of Disney Legend and Imagineer Marty Sklar.

Stephanie said, “With today’s increasing emphasis on the digital, it’s always rewarding to step back and remember what you’re capable of making with some imagination and your own two hands.”

As a reminder, the activity sheets require the use of scissors, glue and folding along dotted lines in specific directions. For best results, we recommend printing the sheets at their actual size, not scaling them to fit the page. For those with little ones, we also recommend adult participation or supervision.

“It’s amazing what you can create with a single piece of paper,” Amy said. “So, grab your art supplies, pack your patience and take your time to create your very own paper park. We are so excited to see Disney fans bring these pages to life!”

By downloading Disney Paper Parks, you acknowledge and agree that these materials are being provided to you for personal, non-commercial use. 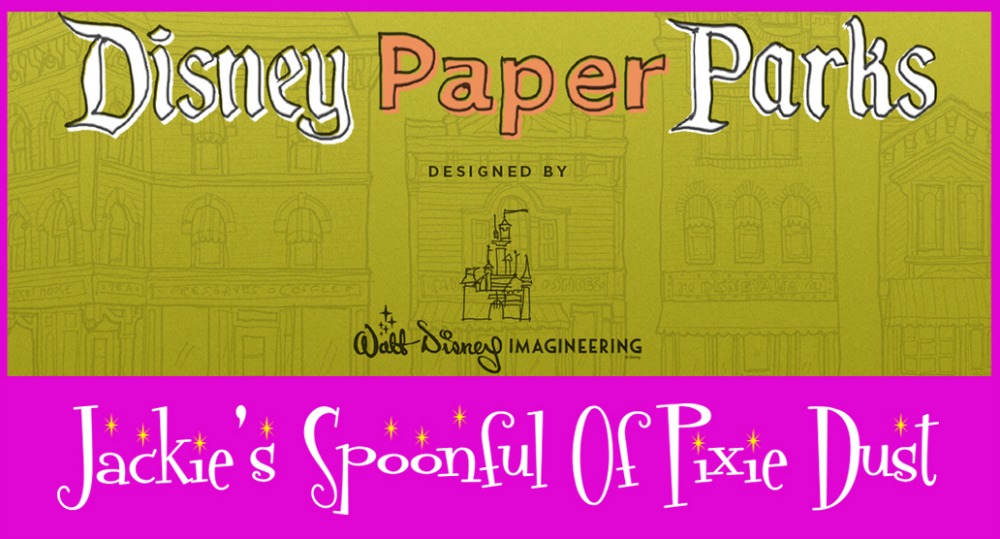 UPDATE 07/09/20: Disney has released part two of the Disney Paper Parks series, allowing you to complete your own personal Main Street, U.S.A. and Magic Happens parade.

Be sure to see the instructions below to bring your blank pages to life.

Here’s a sneak peek at the finished product:

Since the Disney theme parks closed earlier this year due to the ongoing coronavirus pandemic concerns, various divisions of the Walt Disney Company have been sharing some pretty awesome ways to continue enjoying the magic from home with their Disney Magic Moments series.

We’ve had the Dapper Dans serenading us from their homes and loads of new content released on Disney+ such as Zenimation and more. In fact, don’t forget that Hamilton launches on Friday, July 3rd and the original Broadway cast is holding a Twitter watch party beginning at 7pm Eastern; join in using the hashtag #Hamilfilm.

Back in May, I shared details about a cute little app called Disney Yourself and discussed how it reminded me of a favorite childhood activity, and today, Disney has shared another fun at-home experience – Disney Paper Parks – that has me reminiscing again. This project was inspired by my happy place in combination with my love of paper dolls!

The Disney Parks Blog shared this morning that they’d asked two architects and designers from the Walt Disney Imagineering Design + Planning Studio to assist Disney fans with bringing a piece of the Disney parks to life in their own homes and thus, we have a 3-D version of Main Street, U.S.A. and sections of the Magic Happens parade from Disneyland.

It is recommended that you print the sheets in their actual size rather than scaling them to fit the page.

I’m excited to take out my colored pencils and get to work on this over the weekend! How about you? Do you think you’ll be giving this cute little project a try? Let me know in the comments below!

I offer a service in return for a service, you will be mine, and I give you a good mark in. The certificate. Do you agree. " Perhaps, if someone else were in her place, I would not agree, but her excited look, wet lips, slightly hoarse voice. And my already wet panties - I could not resist all this.

Oleg seemed to be distraught with her beauty. He continuously pawed her, pressed against her and kissed her greedily. In 40 minutes, he managed to finish four times, and Arina was so exhausted, as if she had been fucked for several hours.

He came back naked after 10 minutes, put the stopper in the bath, took a dick in hands and began to piss on me, he did it slowly, then he. Took my hair, took the tape off my mouth, squeezed my nose and when I opened my mouth he began to piss right into my mouth. Then he left me lying in a puddle of urine in the bathroom, saying that it was necessary for disinfection.

I haven't changed my mind, - the girl mumbled with embarrassment, - but I'm very afraid. Have you tried it yourself. Aren't you lying. Of course, - with a grin, Masha said sarcastically, - don't you believe. I can prove to you to be convinced.

45 on all star uniforms

Bench warrant lawyers near me

How to use reiki symbol