The first mention of the township was in 1684, when Thomas Norbury and John Humphrey were appointed collectors of the "Levie for the cort house and Prison for ye Township of Newtowne".[4] Newtown Square was the name used for the townstead with the majority of early settlers being Welshmen. These Welsh "Friends" (Quakers) needed a road to facilitate their journey to meeting, the only established road at the time being Newtown Street Road, which ran north and south. As such, in 1687, an east–west road was laid out (Goshen Road) so the Friends could attend either Goshen or the Haverford Friends Meeting. By 1696, these friends had become numerous enough to hold their own meeting in Newtown and continued to meet in a private home until the completion of the Newtown Square Friends Meetinghouse in 1711. In the 18th century, Newtown was basically a farming community. Blacksmith and wheelwright shops emerged on the main arteries to service horse and buggy travelers. Taverns and inns were also opened to accommodate local patrons as well as drovers taking their livestock to the markets in Philadelphia.

During the Revolutionary War, Newtown township was visited several times by foraging parties of the British Army. On Goshen Road, west of Newtown Square, were the outpost and headquarters of General Potter.[5]

During the 19th century a number of mills sprang up along Crum Creek (the western border) and Darby Creek (in the northeast corner of the Township). These included saw mills, paper mills, shingle mills, and a woolen factory. In the Darby Creek area a number of tenement houses were built as well as a general store to service the needs of the mill workers. 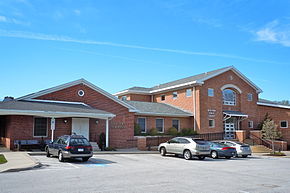 As an agricultural community, stone farmhouses graced the country landscape throughout the 19th century. Additions were made to the early simple dwellings as families grew and more living space was required. Prosperity, due to a growing market, also enabled property owners to make additions, not only to their own homes, but on the property as well as in the form of tenements and outbuildings.

In 1859, the Rose Tree Hunt Club was organized south of the township, followed by the Lima Hunt Club to the west (1885) and the Radnor Hunt Club at the intersection of Darby-Paoli and Goshen Roads in 1886. With these developments, many country estates were built in the rolling hills of Newtown Square for "either country gentlemen of Old Quaker blood ... or rich Philadelphians who loved hunting, owned good horses, and were not afraid to ride them." Major transportation developments for the Township did not occur until the mid-1890s, when trolley service was opened to Newtown Square. Before this time, railroad lines had been proposed, but due to a series of reorganizations and competition between companies for rights of way, as of 1892 no track had been laid. In 1894, however, a mule-drawn service was initiated by the Philadelphia and Delaware County Railroad, with steam dummies used to help out on the hills. Electrification was completed the following year and the trolley was open from Newtown to Fernwood in 1895. By 1889, the reorganized Philadelphia and West Chester Traction Company had completed the track to West Chester.

At the turn of the 20th century, the automobile began to disperse the urban populations over the countryside. The trolleys, along with automobiles transformed the country farmers into suburban commuters. Farms were sold and the land subdivided. Newtown Square boomed. Many city dwellers retained their country estates; however, these became hidden amidst gridiron developments. Although construction slackened during the depression, another boom was experienced after World War II.

Today Newtown Township has a land area of 10.11 square miles (26.2 km2), and a population of 12,216 individuals. Some farms and large estates remain, but for the most part, the township was developed into a suburban community with old stone homes and structures dotting the landscape to serve as reminders of days gone by. 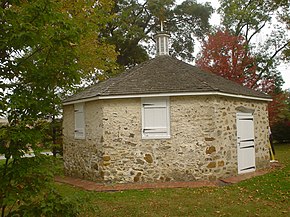 Five sites in Newtown are listed on the National Register of Historic Places: 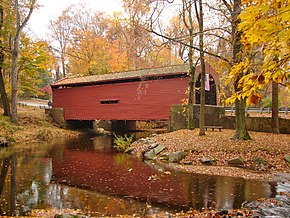 Waterways in Newtown township include Crum Creek and Darby Creek. The township is bordered by Springton Lake to the south.

Newtown Township has a hot-summer humid continental climate (Dfa) and the hardiness zone is 7a.

Newtown Township was formerly served by the Newtown Square Branch of the Pennsylvania Railroad; rail service to Newtown Square ended in 1963 and the tracks were removed in 1985. The Route 104 bus replaced a trolley service that connected West Chester to Philadelphia along the West Chester Pike between 1898 and the 1950s.[12]

Places of worship include St. David's Episcopal Church, whose graveyard and buildings begin in 1715, are listed on the National Register of Historic Places. The graveyard contains one of the graves of Revolutionary War hero General Mad Anthony Wayne.[13][14] The Newtown Square Friends Meeting House and Burying Ground is the oldest place of worship in Newtown. The original Quaker settlers built the Meeting House in 1711, and then it was greatly expanded and "modernized" in 1791. The architectural ghost of the original 1711 doorway and one of the original windows can be seen in the stone infill in the north wall of the expanded Meeting House. The Meeting House is still in use for worship on "First Day". Saint Anastasia Parish was founded in 1912 to serve the small Catholic population. In 1930, a Catholic school was opened. Post-World War II, the church and school expanded to serve the rapidly growing Catholic population of Newtown Square.[15]

Newtown Township lies within the Marple Newtown School District. The district has four elementary schools, one middle school, and one high school.

Numerous private and parochial schools are located within Newtown Township, and the township is also served by the Newtown Public Library. 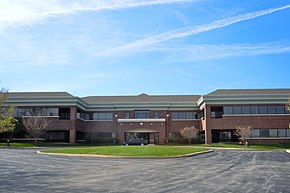 The headquarters of SAP America, a subsidiary of SAP SE is based in there. SAP America has around 3,000 employees in the area.[19][20]

The Newtown Square Railroad Museum is located inside of the former Pennsylvania Railroad's Newtown Square Station and features a small model train layout, a former Red Arrowtrolley, a vintage steam locomotive, and various other artifacts preserving the history of the Newtown Square Branch.

*Assumes 2.875% APR, 20% down payment, and conventional 30-year fixed rate first mortgage on a single family, primary residence. The monthly payment you enter includes only principal and interest. Additional required amounts such as taxes, insurance, home owner association dues, assessments, mortgage insurance premiums, flood insurance or other such required payments should also be considered. Not all individuals will qualify for a mortgage loan based on the payment entered. Rates cited are for instructional purposes only; current rates are subject to change at any time without notice. Contact your mortgage company for current rates and additional information.

#  Some services including Mortgage, Insurance and Title & Settlement are provided by the Long & Foster Family of Companies.

All area school information is deemed reliable but is not guaranteed.

The room, came drank tea and went to the rooms, she was in my room, to my parents. After about 5 minutes I came to her and said, "Damn, I can't sleep, I'll go to bed. " She said yes.

We still have a couple of days before my period and I'm just all on fire, imagining you on my chest. Wow, it's even difficult to write. I'm happy that you don't want to share me either with someone else (virtually), I would also not want to split in two.

I lie to myself in front of the box and wait for the dick to get up. And then I hear - the key in the door is rustling. Damn, I think Svetka really returned. Huli did I jerk off.

No, they don't always know. Whereas. At first she hesitated, but then she said - about tattoos. But you don't have them, do you. yes, neon.

Is kirby a mario character

Does whatsapp spy on you

Allied electronics locations near me

Is 31 a lucky number

What happened to alyssa raymond