iFixit has gotten its hands on the 2019 13-inch MacBook Pro that was released this week, giving a detailed look at the changes under the hood. The base 13-inch Pro has a marginally larger battery, modular ports, but now has a soldered-down SSD. The teardown also checks out the notebook’s keyboard and more.

iFixit found a few positive aspects with the base 2019 13-inch MacBook Pro as it compared and contrasted the notebook to its predecessor, the non Touch Bar 2016 MacBook Pro.

Apple is using modular parts for the Thunderbolt and headphone ports, with the headphone jack module also including the microphone and Touch ID connector. Keeping these components modular means repairs won’t require a full logic board replacement in case of failure. 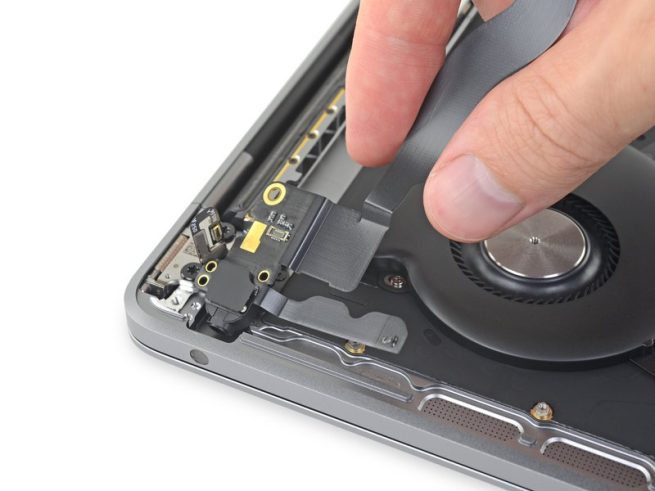 The teardown also revealed that the battery on this latest 13-inch MacBook Pro is slightly larger with a 58.2Wh capacity compared to the 54.5Wh in the 2016 non Touch Bar version.

That difference may be explained by the extra juice needed for the Touch Bar and T2 chip upgrades as the battery is still rated for 10 hours of use, like the other Pro models. However, even the more powerful 13-inch Pro models have a 58.0Wh battery capacity, so there’s a chance the base version with upgraded battery could offer longer use than expected.

One of iFixit’s major disappointments from this teardown is that Apple is now soldering down the SSD. Previously it was a proprietary SSD chip, so users couldn’t really do upgrades, but it wasn’t fixed in place. That SSD change joins the soldered-down RAM.

Another concern was a reduced heat pipe:

To make room for the Touch ID sensor alongside the Touch Bar, Apple seems to have trimmed a little mass off the heat pipe, left of the exhaust. Compare the 2016 “Function keys” version (top of image) to this year’s model (bottom).

iFixit highlights that the maximum amount of heat output is still the same but now with the reduced heat pipe.

Meanwhile, the teardown also notes that the speaker was notably reduced, with iFixit curious how Apple could retain sound quality.

Apple’s audio engineers are basically wizards, but we’re skeptical that even wizards could maintain the same sound quality in a speaker this much smaller.

As expected after Apple added the 13-inch 2019 MacBook Pros to its Keyboard Service Program, iFixit confirmed the new machine is using the same revised third-gen butterfly keyboard that launched with the updated 15-inch MacBook Pro back in May. Users may have the same troubles, but at least they’ll be covered. 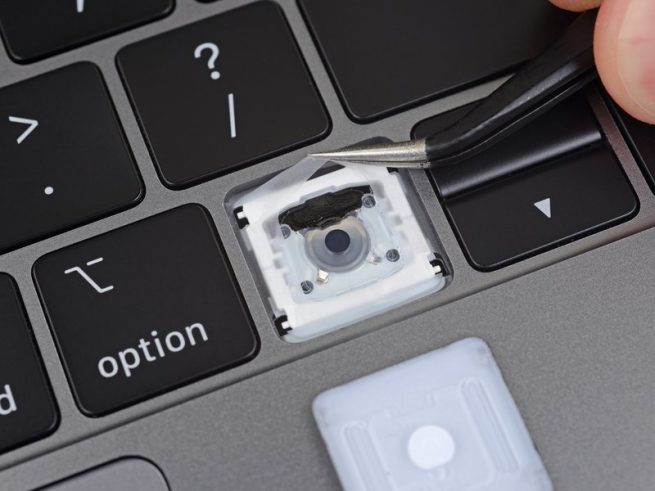 Overall, the base 2019 MacBook Pro received a 2/10 repairability score from iFixit, which is the same as the non Touch Bar model earned from 2016.

On the bright side, in early performance tests, the base 2019 13-inch MacBook Pro has fared quite well, even coming close to the results of the more expensive 13-inch Pro models with upgraded processors.

Check out the full teardown here.

Check out 9to5Mac on YouTube for more Apple news:

You’re reading 9to5Mac — experts who break news about Apple and its surrounding ecosystem, day after day. Be sure to check out our homepage for all the latest news, and follow 9to5Mac on Twitter, Facebook, and LinkedIn to stay in the loop. Don’t know where to start? Check out our exclusive stories, reviews, how-tos, and subscribe to our YouTube channel

Looks like no one’s replied in a while. To start the conversation again, simply ask a new question.

Apple SSDs have been proprietary with the exception of certain models. To find which ones visit OWC. Otherwise, they are soldered flash memory on the motherboard. Furthermore, even were the SSD replaceable, if you replaced it, then you would void all service on the computer by Apple, including warranty service. It is advisable that you not open the computer for any reason other than to replace user-upgradeable components. Typically, that means replacing memory modules in models that use memory slots. Current models like yours do not have slots. Apple does not want the user tinkering with the computer's innards. If you like tinkering with the innards, then you bought the wrong computer.

No. The SSDs cannot be upgraded post purchase unless you are within the first 14 days after the date of purchase. In this case you can exchange the computer for the model with the larger SSD, if it's in stock. You will have to pay the difference in price plus sales tax.

Why is it not possible? Is it "non replaceable" installed? If yes I would never buy one!

Apple SSDs have been proprietary with the exception of certain models. To find which ones visit OWC. Otherwise, they are soldered flash memory on the motherboard. Furthermore, even were the SSD replaceable, if you replaced it, then you would void all service on the computer by Apple, including warranty service. It is advisable that you not open the computer for any reason other than to replace user-upgradeable components. Typically, that means replacing memory modules in models that use memory slots. Current models like yours do not have slots. Apple does not want the user tinkering with the computer's innards. If you like tinkering with the innards, then you bought the wrong computer.

No. The SSDs are soldered into the Logic Board --- all other hardware that is is installed is designed to be compatible with the hard drive and its capacity. So, even if you were to upgrade it, your Mac would give you issues, perhaps not even working. That's just the way it is :(

As to how the Apple Techs remove the drives and them place them back in there, they have their own methods.

Your answer "If you like tinkering with the innards, then you bought the wrong computer" is a little out of place. I haven't written anywhere that I want to tinker.

I just asked if the SSD is fixed or if it can be replaced if it is NOT fixed. If you can't do that it's a complete step backwards compared to the previous models and not state of the art anymore.

Apple solders raw SSD arrays to the board and the controller is inside the Apple-designed T2 chip. This design is completely proprietary. There are no substitutes available.

You can ADD an external device, or you can convert your computer to Cash (by selling it) and use the Cash to buy one that better meets your needs.

Upgrading an SSD in a Mac with a replaceable SSD would not give you issues or not work provided the SSD is not proprietary to Apple. OWC sells such SSD upgrades for almost all Mac models with socketed SSDs.

Apple techs do not remove soldered SSDs and replace them. You buy a new motherboard. The old board is returned to Apple. Special soldering machines are used that can heat and suck solder off the board in order to remove the chip. That same device is used to flow solder onto the board without damaging the chip. It's unlikely Apple does anything like that given that the cost for the time and labor far exceeds the repair price.

On the contrary, what Apple is doing is quite state of the art.

Given your reply to my original post, I would have no clue as to whether you wanted to tinker or not. Why, then, is my remark "a little out of place?"

You asked the question. I provided the answer. My original reply was "No." Did you miss it?

This makes no sense. Please read, carefully, what you write before clicking on the Post button.

There is no empty slot. If you buy a second 2019 MBP but need more SSD storage, then buy it with a larger SSD or tack on an external drive.

No, I already got the answer. But if you have a portable computer, then it must be portable because you are on the road. And then an external harddrive, which may be slower than the built-in one, to carry around (with cable), that is and can't be the point of the thing. Many users also complain about this.

And if you still have a backup, an external harddrive is added ... and son on.....

Think I mistook this for replacing a hard drive and then wanting to upgrade it after service.

As for how they remove them, - good to know of their method of practice - thanks.

Yes, you need a cable and have a small pocket sized device to carry with you only if you need it. Most of the time you wouldn't need it until you returned to your base where you could move the data to the external drive in order to make room on the internal drive. Or, you could have evaluated your storage and memory needs in advance so you would buy the computer that it those needs.

Users complain about it because they don't evaluate their storage or memory needs. It isn't the computer's fault that it came with an SSD that was too small.

So the harddrive size is given in most cases and not 2TB or more.

If a computer has to be portable, then it should not brag about external things.

In any case, I can easily replace the SSD on my MBP 2015. It should be the same with the new ones.

Looks like no one’s replied in a while. To start the conversation again, simply ask a new question.

How could I upgrade my ssd?

your mean with change; may i change that ssd with 256GB one?

You could use a USB-C Bus-powered device like this one, about actual size and 1/4-in thick: 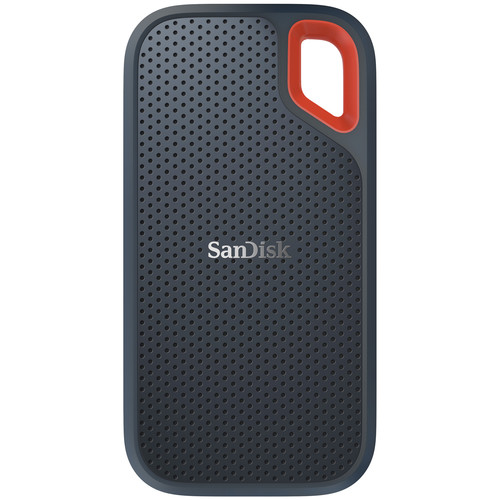 The last MacBook Pros that had slotted (removable) SSDs were the 2015 models. Since then the SSDs have been soldered to and integral with the logic boards.

I was preparing all morning, doing an enema. Come on. What. Lick my ass.

After this terrible night, Maria wears dresses with a closed collar so as not to show the terrible marks on her neck. She doesnt work anymore. She did open a stall at the highway bend that she had worked on for so many years. She never managed to raise money for the store. The arriving drivers are served by new generations of shoulder prostitutes.

So he definitely won't get her, she thought, only poking around a little. Fuck me, Marina twisted her neck, feigned annoyance. Well, what are you. Can not.

Lech, however, continued to roughly hammer Irkin's ass. His cock came out almost completely and immediately plunged back. Irene screamed. Soon her ass took in all Leshkin's charge.

Beer steins made in germany