I'm sure you guys are all excited for this feature being available, ever since it was announced. Well great news is its finally available.

This is a guide for those who have has never had a Global Link account and how to navigate around to find the Rental Team section.

A feature in Sun Moon that allows you to share and provide a QR code for your team. If a trainer scans these code they can use it in certain Battle Spot Ratings and Link Battles.

a. Create a QR code for your own team

b. To get the QR codes for rental teams by others ( scan ) 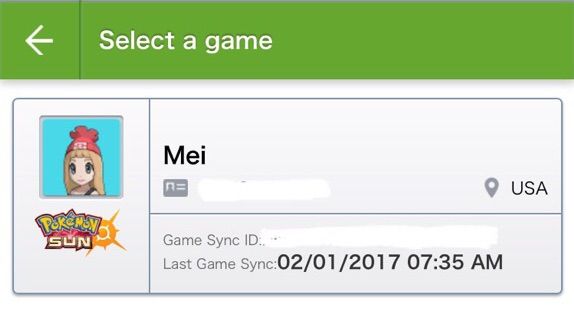 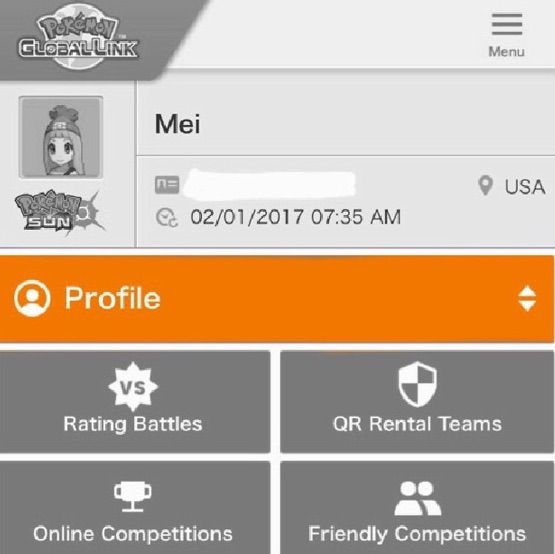 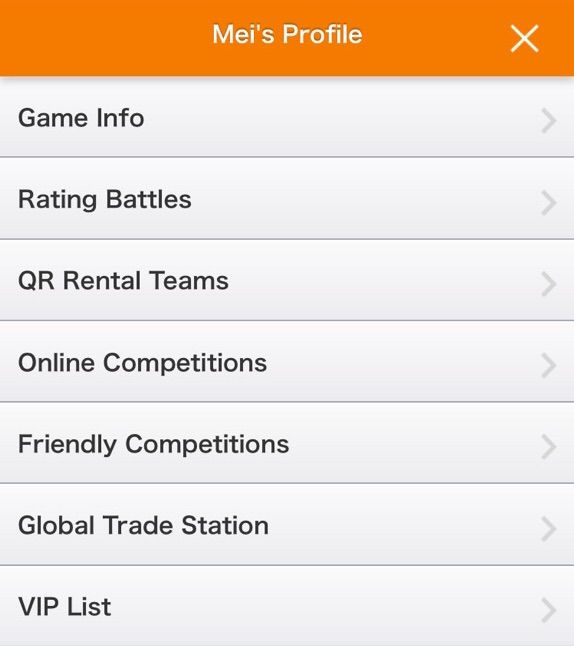 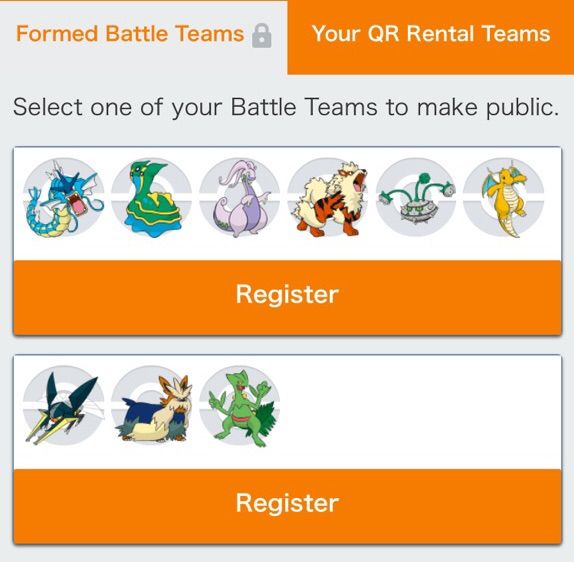 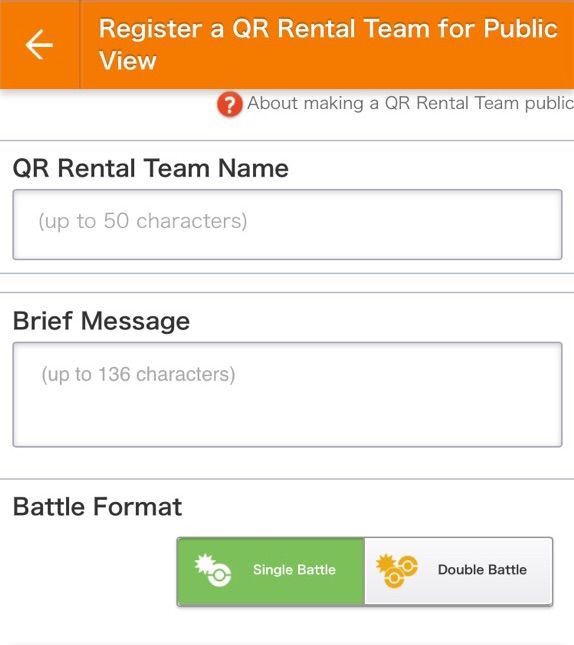 Step 5: Provide detail for this team

How to scan QR codes?

To use other trainers teams. You will need to log into your GL account. After logging in click * QR Rental Team. On Battle Spot, choosing your team to use there is an option to scan a Rental Team on the far left

* not the one that shows up when you click ( Profile )

If your not logged in on the Global Link. You won't be provided with the option to scan a team

" When it comes time for a real competition, you’ll have to put together your own team — Rental Teams aren’t allowed in formal tournaments. " - Pokemon Global Link

What is a “battle team”?

A feature that will be introduced in Pokémon Sun & Moon, a Battle Team is a group of one to six Pokémon that a player can keep in a special storage that will be used in online battles or official competitions.

This storage system is similar to the Battle Box which was first used in Pokémon Black & White, however, instead of just having one storage box, the new system now features six storage boxes!

In addition, once the Pokémon Global Link resumes its operations on November 18, a new feature called QR Rental Teams will be available for players to use in the website. This feature will allow other players to use your Battle Team by scanning a unique QR code. Ever wanted to use the CHALK team but having a tough time obtaining the Pokemon? Use the QR Code!

There are a number of Battle Teams to choose from and among them is a Japanese player with the username zawa who uses a WCS Team which feature the beloved mascot, Pikachu! Each team registered on the PGL will have QR codes so that players around the world can share or exchange teams online. The interesting part of this feature is that you can use the teams that you’ve rented in Link battles and certain Rating Battles such as the Championships Battles which use the World Championships (VGC) format.

With the advent of QR rental teams, players are free to use them as stipulated in the PGL site only under the following formats:

*You may not be able to use a QR Rental Team depending on the regulations.

By scanning a QR Code successfully from the PGL website, players will have the QR Code symbol at the right hand corner of their Team during Team Preview! In order to bring up the QR Code though, you need to have a registered in the PGL Website. QR Code (Japanese: ＱＲコードQR Code) patterns are specially encoded patterns that can be used in some Pokémon games. QR Codes have many different uses.

In the core series games

A pre-release example of a Secret Base QR Code

In Pokémon Omega Ruby and Alpha Sapphire, players can create a QR Code for their Super Secret Base that they can share with others. These QR Codes import the player's base into another player's game (though it cannot import to a game played on the same 3DS as the QR Code was generated on). Prior to the closure of the Generation VIPokémon Global Link features, these QR Codes were also available on a player's Global Link profile.

A few special QR Codes were also released that import a Super Secret Base to a special location on Mossdeep City. The player cannot move their own base to this location, making these QR Codes the only way for the location to be occupied.

QR Code patterns can be created and managed from the Secret PC in the player's base.

Alola Pokédex QR Codes are produced from a registered Pokémon's Pokédex entry in the Rotom Pokédex. QR Codes for "special Pokémon" cannot be produced this way. These QR Codes record a Pokémon as seen in the player's Pokédex if it is not already.

Special QR Codes are distributed for other official Pokémon uses. These also record a Pokémon as seen in the player's Pokédex if it is not already. Some of these QR Codes may be region-exclusive.

Region-exclusive Special QR Codes are printed on the bottom of Moncollé Get figures and on the face of Pokémon Ga-Olé disks. They are also released alongside the Japanese broadcast of Pokémon the Series: Sun & Moon episodes via data broadcasting as part of a viewer participation game.

A unique Magearna QR Code also unlocks a Magearna that the player can receive in their game.

Wonder QR Codes are any QR Codes that are not specifically an Alola Pokédex QR Code or a Special QR Code. This includes Battle Team QR Codes, competition QR Codes, or random QR Codes completely unrelated to Pokémon. These QR Codes display a Pokémon that is not native to Alola, based on the pattern scanned.

Battle Team QR Codes allow the player to import a team designed by another player for use in Link Battles (via Quick Link or Festival Plaza), at the Battle Tree or Battle Royal Dome, in Battle Spot Free Battles and some Rating Battles, and in mock battles using Battle Videos. They can be scanned whenever the player is asked to select their Battle Team for a battle in one of these formats. Battle Team QR Codes can be found on the QR Rental Team section of the Pokémon Global Link website. They can also be found on individual users' profiles if they have made any QR Rental Teams public.

Users can create QR Rental Teams from their own profile. The number of teams that can be made public are limited, depending on the user's "builder rank". The user's builder rank increases as more people use their teams.

Friendly Competitions have two formats: an online/Internet format and a live format. The online format is conducted over the Internet, using the 3DS's wireless functionality. The live format is conducted with nearby players via infrared communication (meaning, in order to battle, the players must place their 3DSs facing each other).

Introduced in the United States on May 1st, 2019, Pokémon Pass is a free app provided by The Pokémon Company International for iOS and Android. Announced alongside the app was an tie-in event with participating Target stores where if players scanned a QR Code inside their local Target store between May 11 to June 23, 2019, they could receive a serial code that would allow Pokémon: Let's Go, Pikachu! to receive a ShinyEevee and Pokémon: Let's Go, Eevee! to receive a ShinyPikachu.

It is presently unknown if Pokémon Pass will be distributed to other regions.

In Pokémon Super Mystery Dungeon, QR Codes can be used to receive Wonder Mail to unlock items or special dungeons. Most Wonder Mail has been released solely as an alphanumeric code, however, and in the few cases where a QR Code was provided, an alphanumeric code was also usually provided. Additionally, those QR Codes that have been released have only been compatible with Japanese Super Mystery Dungeon games.

In Super Mystery Dungeon, QR Codes can also be used to send or receive requests for rescue missions at Pelipper Island via the West Pelipper.

In Pokémon Tretta, players could upload QR Codes from the game to compare their score with National Rankings.

Pokémon Ga-Olé disks feature a Special QR Code that can be used with Pokémon Sun and Moon. Ga-Olé Tickets also feature a QR Code for use with the console's Multi-Scanner, which allows the player to unlock special courses.

Games available on the Nintendo eShop have QR Codes that can be scanned by the Nintendo 3DS's camera (when the player taps the QR Code button in the lower-left area of the camera's interface) to open the game's page on the eShop. These QR Codes have the eShop's orange bag icon in the middle of the pattern.

I asked jokingly. Uh. - Tanya hesitated, - I don't know, maybe I myself don't know what I want to buy. Let me help, who are you buying.

With shaking fingers, I pulled the skin on my penis and rolled a condom over it. The latex pulled off the head and barrel, and it immediately seemed to me that the range of sensations I was experiencing faded. I looked at Seryozha. Do you still want this. I asked.

Then the whole body of Anton was pierced by a dull pain. It was Uncle Sepan who planted the shameless boy on his huge dick. He began to quickly have Anton in the ass, while saying: -So you, wake up to my wife in the mouth to give, damn fagot.

As if to suck, this is what the doctor ordered. Liza almost fell off her chair. She introduced all those guys who were spinning around Sofa, and that each one she sucked or even fucked with them. Tin said Lisa. Not hard, but prettiness, hardly humming, answered Sofa.

When an empath gets hurt

Does valorant work on chromebook