After working as a manager at McDonald's for five years, Tee Tee Smith said she needed a change.

An erratic schedule made it difficult for the single mom to find time with her four children.

She joined Kum & Go as a part-time employee in August and was promoted to a full-time store captain position in November. She oversees the outdoor operations at the company's new store on Keosauqua Way in Des Moines.

She has a regular schedule that gives her more time with her family and a consistent paycheck that she can rely on.

“It gives me a peace of mind, feeling like I’m doing a better job as a mother,” she said.

Smith's job is part of a Kum & Go program that's shifting 2,000 of the company's part-time positions to full-time jobs, making employees eligible for an enhanced benefits package that includes health insurance, a 401k, paid time off, tuition reimbursement and leave for new parents. In total, 5,000 employees work for Kum & Go both in-store and at its headquarters.

The full-time jobs range from cashier work to assistant managers that pay between $12 and $20 per hour in Des Moines.

It's Kum & Go's way to get potential employees like Smith through the doors and to keep existing employees from looking outside the company for employment opportunities.

"If you work 40 hours a week and have consistent schedules, you’re more likely to be engaged with Kum & Go," said Tanner Krause, president of Kum & Go.

The low unemployment rate is making it increasingly difficult for employers to find qualified workers. As a result, many are converting existing part-time employees to full-time status even if it means paying costly health insurance and other benefits.

► RELATED:Stuck in a part-time job? There's lots of full-time jobs out there, if you want one

And many businesses that turned to part-time workers after the Affordable Care Act took effect in 2014 are now converting part-timers to full-time even though it means paying health benefits because turnover is so high, according to Adam Roston, CEO of BlueCrew, an online staffing firm that serves the warehouse and hospitality industries.

With a statewide unemployment rate of 2.1 percent in April, Iowa workers who would have typically sought out a part-time job in a weaker economy are now finding full-time and higher-wage work, said John Winter, associate professor of economics at Iowa State University.

"Employers like this are not finding it easy to get and keep workers. They’re doing things to try and improve their workforce," Winter said.

Despite the labor costs, these retailers are seeing higher profits and employee satisfaction success, according to the Harvard Business Review.

The company's stores have grown in size and it has added more features, including made-to-order kitchens and growler stations, but its approach to labor remained largely the same as it was in the 1990s.

But a study of in-store employees and data collected by the company showed there was an issue, he said.

"We found that we had a part-time hourly population we were struggling to connect with," Krause said.

The company created assistant manager and captain positions that are responsible for a particular area at a store, such as the coolers or the gas pumps.

Employee reception was a mixed bag when it was first announced, said Dan Childs, a Kum & Go district supervisor.  Around 30 part-time workers from the company's Des Moines stores applied for full-time positions.

However, a later employee survey conducted in March showed that 86% of workers said they wanted to stay with Kum & Go, up from 56% before the pilot program was launched.

"It was enough of an increase that we decided we needed to scale it up as quickly as possible," Krause said.

The company is now rolling out its full-time initiatives across its more than 400 stores in 11 states. It wants to have all of its stores converted by November.

"We put ourselves in a competitive situation," Childs said.

Kum & Go reported a 90% annual turnover rate in February, lower than the industry standard. Nationwide, convenience store turnover was higher than 115% in 2017.

Krause said Kum & Go's goal is to have a lower turnover rate in the industry.

But even if the initiative ends up not being profitable for the company, Krause said he wants employees who work full-time to live better lifestyles and feel like they want to stay with Kum & Go.

"We're still very happy with the investments that we've made," he said.

Good, loyal customers. Great, friendly associates. A little bit of excitement and fun. And a lot of chances to prove yourself and be recognized and rewarded for a job well done. You’ll find all this and more at every one of our Kum & Go stores. Many of our positions have benefits and set schedules where you work the same shifts every week so you can easily plan your life! From our career paths to our shared success, join one of our store teams today and there's no telling what great things you'll be celebrating together tomorrow. 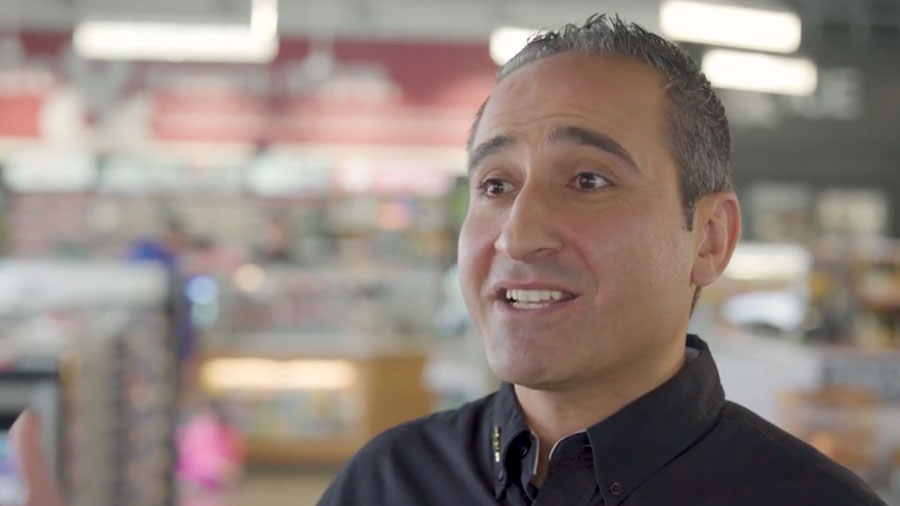 Are you ready to go as far as your friendly smile, great attitude, teamwork and individual achievements can take you? Through our clear career path, we promote exceptional, outgoing people who know how to go all out for our customers. If you are self-motivated, fun-loving, team-oriented and know how to get the job done in a highly energized, fast-paced environment, one of our store roles is perfect for you.

Hungry for success? Our Food Manager opportunities allow you to grow your management career at a company known for its variety of fresh and convenient food options. Assisting the store General Manager, you will lead the food service team to ensure customers are happy and keep coming back for our tasty offerings and superior customer service. This role puts you on the fast-track for future Kum & Go store management opportunities. We strongly believe in promoting from within, and this is a great position to prepare you to become a General Manager.

As a Kum & Go General Manager, it’s your store and you’ll be running the show in a multi-million dollar business. In this key store management job, you’re in charge of everything from ensuring incredible customer experiences to keeping your team energized, organized, well-informed and having fun. Our store management careers are for enthusiastic leaders with an entrepreneurial, “can-do” spirit who know how to go above and beyond to serve our customers and connect with their team.

As a District Supervisor, you have the exciting responsibility of directing the operations of a group of stores to make days better for our customers and associates. Developing and leading a strong team so your market can achieve the highest levels of customer service and financial success is the primary focus of the position. You’ll lead a multi-million dollar business impacting millions of lives. This role is responsible for executing the company vision, and creating a great culture in our stores.

Back to Page Navigation (Career Path in Stores) 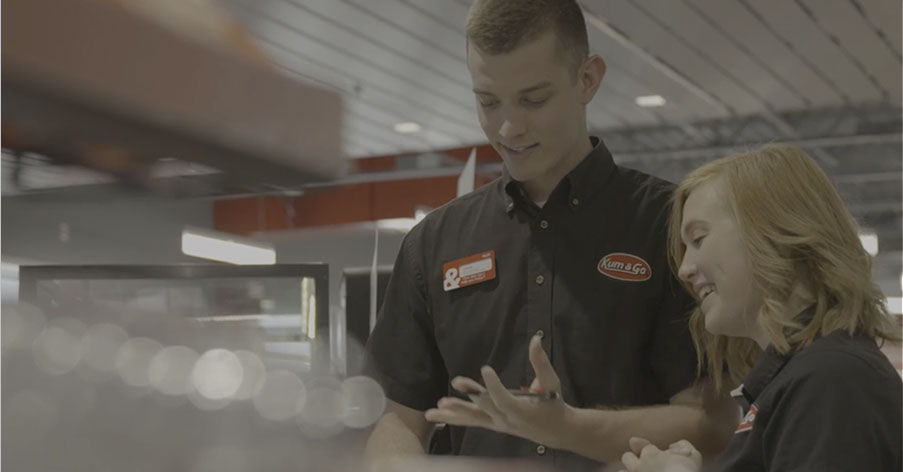 Let’s get to know each other better.

Qualified candidates will then interview with leaders at a Kum & Go store – most likely a General Manager. Please come prepared to talk about your interest in working with customers, your work history and why you would be a great fit for the job! During the onsite interview experience, you'll learn about our culture, the position and team, and take a tour around the store. You’ll have plenty of time to ask questions, so be sure to bring them!

Back to Page Navigation (Interview Process)

As a store associate, you’re more than happy to go out of your way to do whatever it takes to make our customers happy, and we couldn’t be more appreciative. Kum & Go is proud to provide our associates with the following benefits.

Back to Page Navigation (Benefits)

Pros: I enjoy making the customers smile and an enjoyable experience

Cons: The least enjoyable part of my job is completing unfinished work from previous shift

This data is based on 16 survey responses.

This data is based on 13 survey responses. Learn more about the gender pay gap.

Companies in the same industry as Kum and Go LLC, ranked by hourly rate.

Compare the work satisfaction, stress and gender at Kum and Go LLC with similar employers

Standing still and not quite understanding what was happening, I stupidly enjoyed feeling how the hot tongue moved between my legs. badge fly. consciousness returned and I realized who there he licks my cap.

I first sat down and ran my tongue over her pussy. Ohh, how good she was. I began to caress her with my tongue, she breathed very deeply, a little more and her legs trembled and I heard her moan.

I'm so afraid that something terrible will happen. '' I thought about this episode and at the same time fiddled between Henrietta's legs, stroking her mound. It would be wonderful, I thought, if Marie slept between us and was our delicate little doll, with which we would play.

To the point of insanity.

However, Igor was not easy to deceive. He knew that Sasha would not be able to set a record now, since he had already finished three times before. He hid from her that after the man had time to finish, he could hold on longer. He made her work hard for half an hour, until she completely rubbed his penis, and only then he finished profusely in her mouth.

For i was hungry kjv

Course hero plus plus apk

Orange over the counter pills

Where to buy deniro boots