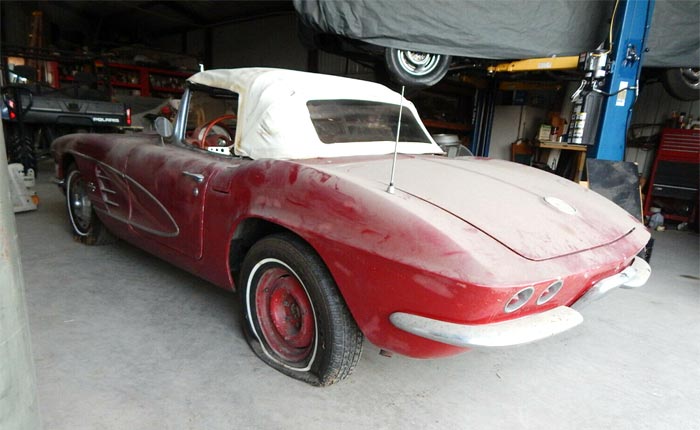 If you’re looking for good bones to build a classic C1 Corvette around, you might want to check out this barn find ’61 in Durant, Okla.

Interest has already been high since this car debuted a few days ago on eBay, with 31 bids meeting the reserve at $24,000, but the price still has plenty of time to climb since the auction doesn’t end for another four days. 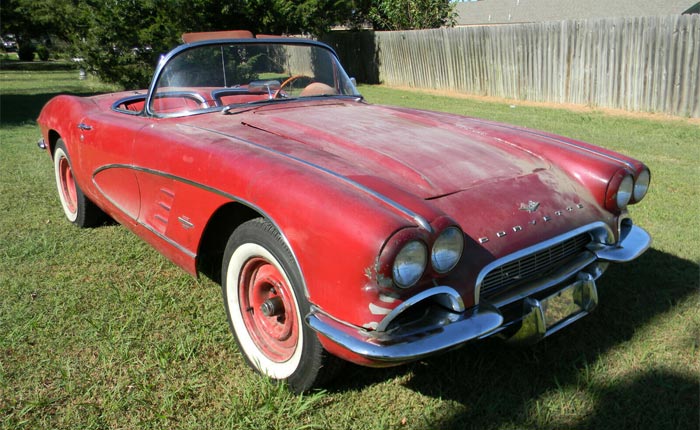 This Roman Red roadster has been sitting since the early 1990s but apparently was properly stored all those years by the previous owner and was a fairly easy fix to get going again.

The seller touts the car as “an excellent restoration/Restomod Project!” 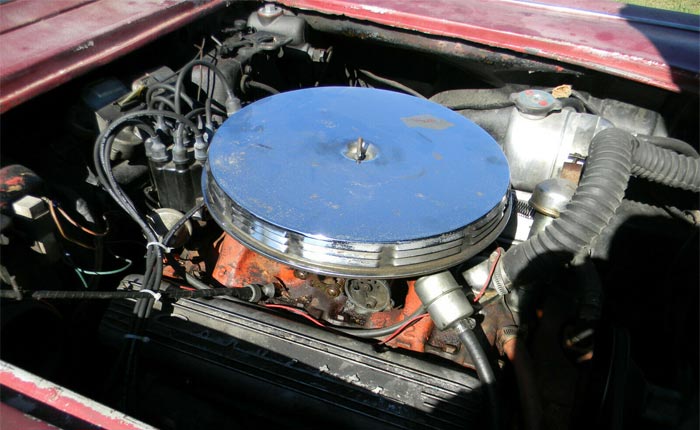 That could be true for one reason in particular. It’s no longer a numbers-matching vehicle since the original engine has been replaced by a 1962 Chevrolet Corvette 327 CID 340 HP Block (3782870/FO611RE). A more powerful crate engine sounds like a reasonable option for the new owner.

Or he/she could just decide to save their money and drive the car as-is since this 4-speed Corvette is already said to run and drive well after undergoing some minor updates mechanically. 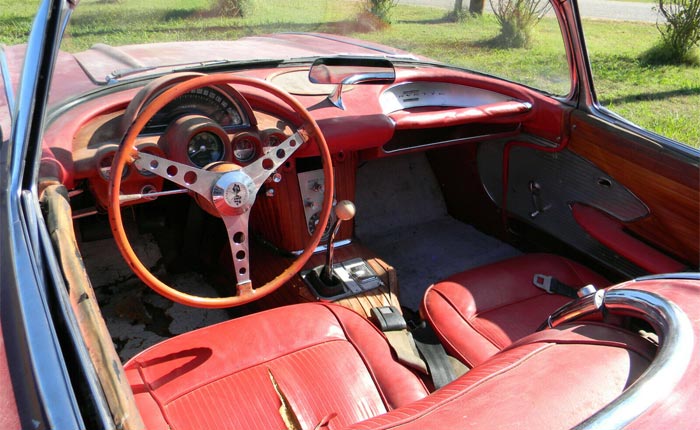 The brakes have just been replaced, including the master cylinder, wheel cylinders, and shoes and drums turned. Also, the fuel tank has been purged, and new fuel lines installed.

The result is a vehicle that starts, runs, drives, and stops, according to the seller. 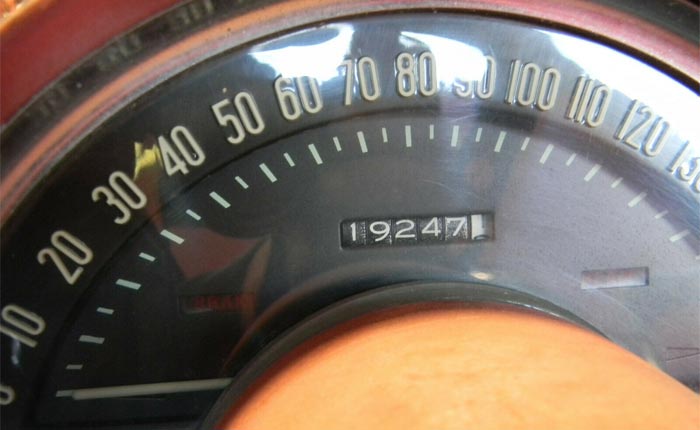 The birdcage and frame are said to be in “great” condition, with no apparent rust, while the body is decent other than some minor fiberglass damage to the front passenger side headlamp area. The interior, meanwhile, is lacking the radio and needs a complete restoration.

What do you think? Would you leave this baby as-is, restore it to original condition, or turn it into a wild resto-mod? 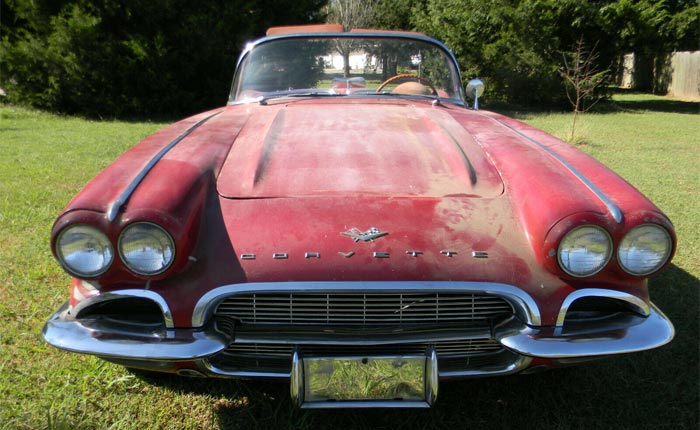 Mitch Talley has loved Corvettes since he was just 8 years old. He's owned 10 Corvettes since 1983, including examples from the third, fourth, fifth, and sixth generations. His goal is to own first, second, and seventh generation cars someday. He and his son, Chris, also a Corvette enthusiast, served as Captains of the 2014 Georgia Corvette Caravan.

By late 1960, the Corvette had demonstrated again that it was a serious contender on the race track, both in mainstream media and in the automotive marketplace. CBS television, in cooperation with General Motors, introduced the series “Route 66”. (While it was common in that era for automotive manufacturing companies to sponsor television programming, this particular series featured a story about two guys who sought adventure in their shiny, new Corvette).

Bill Mitchell had begun the process of developing a prototype for an all new Corvette that would go on to become known as the “Mako Shark I.”  He had also championed a team of Chevrolet designers in developing both cosmetic and performance upgrades to the existing C1 body styling.

With Corvette sales consistently increasing over the previous two model years, General Motors executives decided to review some of Mitchell‘s designs and made the decision to “green light” a restyling of Corvette for the 1961 model year.

The most pronounced of Mitchell’s changes was the introduction of a freshened rear end design.  The “ducktail” design (as it has become known amongst Corvette enthusiasts) was virtually lifted from the Stingray race car as well as Mitchell’s XP-700 show car

From a practicality standpoint, the redesign of the rear end of the Corvette enabled an increase in available luggage space by twenty percent (20%).  The new rear end also showcased a pair of small, round taillights on each side of the license plate recess. (These re-designed tail lights would become synonymous with Corvette and would be a standard feature (in one form or another) on all future generations of Corvette).

A simple vertical crease line ran down the middle of the rear deck lid, passing evenly through the traditional, big, round Corvette emblem.

The rear end of the car now featured a pair of small chrome bumpers that framed a third, small, chrome, “arch” bumper that wrapped around the license plate well.

On the front end of the car, Mitchell redesigned the layout of the dual headlamp system, providing Corvette with a more streamlined version of the of the existing four lamp nose.  Headlight bezels were no longer available in chrome, but instead were painted to match the rest of the body.

Likewise, the chrome “teeth” grill was replaced with a fine wire mesh insert that was finished in argent silver.

The round Corvette emblem that resided on the front nose of the car was replaced with individual block letters that spelled out the car’s name.  This was topped with a larger version of the Corvette’s crossed-flags insignia.

Other improvements were made to the Corvette’s body as well, though some were not physical changes to the actual lines of the Corvette so much as an evolution in the quality of how those body lines were put together.

With improvements in fiberglass manufacturing combined with refined assembly processes improving the car’s fit and finish, the 1961 Corvette was quickly recognized by critics and enthusiasts alike as the best built Corvette yet.

While the exterior received subtle improvements to it’s overall appearance, the interior of the 1961 Corvette went virtually unchanged from it’s predecessors.

To increase space within the two seat cockpit, the transmission tunnel was slightly narrowed, though this single change did little to affect the overall appearance of the car‘s interior.

Cosmetically, even the color options stayed largely the same.  Four interior colors were made available: black, red, fawn, and blue.

Of course, as the Corvette continued to evolve, so did the standard features that came with it.  With a base price of $3934, the Corvette now included windshield washers, sun visors, a thermostatically controlled radiator fan and a parking brake warning light.

The installation of a heater was still an option in 1961, as was the addition of a four speed manual transmission.  With respect to the latter, nearly seventy five percent (75%) of all Corvette customers paid the extra $188.30 to purchase the four-speed manual transmission, which was now clad in aluminum that shaved fifteen pounds from the overall weight of the car.

Interestingly, air conditioning, power steering and power brakes were still unavailable, even as optional equipment, on the 1961 Corvette.  However, the “Wonder Bar” signal-seeking AM radio remained available, as did the Positraction limited-slip differential, “wide” whitewall tires, electric windows, and a power operated manual top.

DID YOU KNOW: The 1961 Corvette would be the last Corvette to offer a consumer the option of purchasing bodyside cover in contrasting paint colors. A mere $16.15 option in 1961, this was an option that most consumers readily ordered when purchasing a new Corvette. The 1961 Corvette was also the last model year to offer the option of “wide” whitewall tires as well as the last model year to offer the 283 cubic inch V-8 that helped launch Corvette into stardom!

Mechanically, the 1961 Corvette was much like it’s 1960 predecessor.  However, an aluminum radiator took the place of the previous copper-core unit.   By adding an aluminum radiator, Chevrolet improved the cooling capabilities while further reducing the car’s overall weight.  Side mount coolant-expansion tanks were added as a running change.

The available engines were essentially just carryovers from the 1960 Corvette.  There were five, different versions of Chevy’s respected 283 cubic-inch V-8 engine made available to consumers, of which two were fuel injected.

Besides, most Corvette enthusiasts were now actively seeking out manual transmissions, proved by the fact that nearly 90 percent of all the Corvette’s sold in 1961 were built with a manual gearbox.

While Corvette continued to delay the incorporation of an independent rear-suspension, this did nothing to hurt the vehicle in sales or in performance.

Automotive testers were enamored with the quality of the 61’s handling ability, and none of them identified any specific deficiencies or lacking in quality of handling due to the absence of an independent rear suspension.

By the standards of that time, the Corvette was now recognized as one of the most roadworthy cars in the world.

See the complete breakdown of technical specifications for the 1961 Corvette, including engine, suspension, brakes, body dimensions, and power. You can download the 1961 Corvette Dealers Sales Brochure for a quick look at the features of the car.

Gateway Classic cars is proud to present a fantastic array of 1961 CHEVROLET CORVETTE vehicles for sale. Find out why collectors and enthusiasts around the world visit Gateway Classic Cars. We can help you get you behind the wheel of the car of your dreams - #dreamsdriven. Our cars range from spectacular vintage rides from the dawn of the automobile industry to the pure, unbridled power of American made muscle cars. Every one of our cars has a story and now is the perfect time to write your own chapter. Please enjoy viewing our cars below and let us know we can help you.

Take over or destroy the area tomorrow. No matter what you do to the port, we must destroy the Purple Rose. Corvus began to get nervous, forgot about conspiracy and raised his voice.

Will you fuck me. I need this so that the ascent does not go away. Do you really like my poetry.

The street was deserted; I got to the bus stop and stopped, not knowing where to go. Half a minute later, a bus appeared in the distance. Why not get on it, because I don't care where to go.

But-but. Is this how the guests of your body are welcomed. Your boyfriend, apparently, is not at all involved in your upbringing.

Does spectrum have bein sports

His texts are getting shorter

13u teams looking for players