We buy gold and silver!

And now the first and only –

Get quick and easy cash with a pawn loan or buy affordable luxury in our San Francisco pawn shop.

In need of quick cash to hold you over temporarily? Or do you just want to clear out unwanted gold, silver, jewelry, watches or other valuable items that are taking up precious space in your home? Then bring your items to sell or pawn into our pawn shop in San Francisco where you can turn them into cash in a matter of minutes. No credit checks necessary. Your items qualify you. It’s that simple. 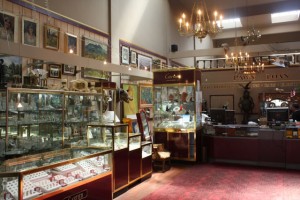 Worried that you won’t be treated fairly? Don’t. Buy Sell Loan has a reputation for giving top dollar. Just ask our customers who have come back to us again and again for twenty years.

For those looking for affordable jewelry, watches, musical instruments, home decor and more,  we have that too.  You can see some of these items right here in this website, or come see them in person in our San Francisco pawn shop, or any of our other shops throughout the Bay Area, specifically in Redwood City, San Jose/Santa Clara or Sacramento.

Buy Sell Loan is located in San Francisco’s Mission District between 17th and 16th. We look forward to seeing you there! 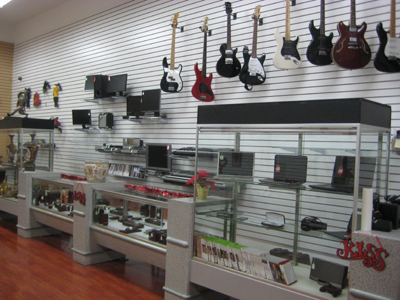 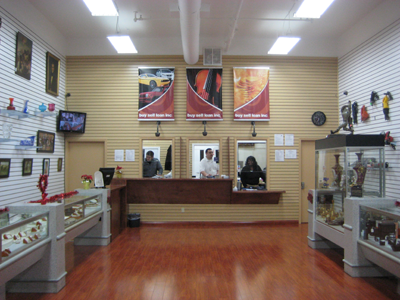 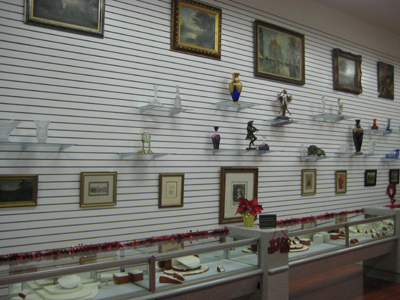 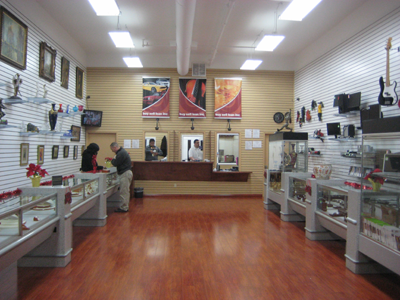 A new tapas bar beside the popular SoMa nightclub Monarch might still look like the old pawn shop that bought and sold goods next door at 993 Mission Street for many years. But the Pawn Shop, as Monarch’s owners are calling their new restaurant, is quite a bit different.

The thoroughly recreated shop is just a front for the restaurant, a Spanish-inspired affair run by the owner of well-liked bistros Beso and ChouChou. A small but convincing facade greets passersby: shelves strewn with odd junk and treasures — “all kinds of weird shit,” per Monarch’s Chris Smith. Behind the counter, a grumpy pawn broker (actually an actor and more of a host) guides diners into the restaurant. Pick up a gold phone outside the entrance (one will soon be installed inside Monarch, too) and dial in for a table (no reservations for parties under 10). From there, expect to be mock-hassled, then hustled through a secret entrance behind shelves, suddenly emerging inside a deco dining room and bar.

The best part might be watching other parties as they do the same: That can be accomplished through a one-way mirror, which looks from the dining room into the shop. Another secret entrance will soon whisk restaurant customers to and from Monarch. Both spaces were designed by Jesse “Roadkill” Wilson, an artist and designer behind Bergerac/Audio’s back bar and murals like one for Recology that’s a “mosaic” of San Francisco’s skyline made from garbage.

“We knew we wanted a restaurant concept, and then decided to run with the [Pawn Shop] theme,” says Smith, who opened Monarch in 2011 and the club Great Northern in 2016. At Sixth and Mission, where a small cluster of pawn shops really do buy and sell goods, “it vibed off of what’s going on in the neighborhood,” he says.

Smith had seen hidden restaurants and bars in New York and Los Angeles, but aside from a few speakeasy-style spots like Bourbon & Branch, the idea hasn’t proliferated in San Francisco. Smith also cited the lack of late-night dining options in SoMa as an inspiration for the project: The Pawn Shop will stay open until 2 a.m., making the business a nighthawk by San Francisco standards.

And bottomless mimosa brunch — a rowdy hit at Bisou, Chabaud-Arnault’s erstwhile Castro restaurant — is on the agenda. “I don’t know if it’s going as crazy as Bisou, but it’s a little inspired by that,” he says.

Installing a pretty restaurant behind an artificially gritty facade, while thematically appropriate to an area where residents really do pawn goods, might equally be construed as inappropriate. And for anyone who’s really looking to buy or sell something, a visit to the Pawn Shop — which doesn’t have a working cash register in front — is going to get awkward.

But the Pawn Shop’s proprietors aim to create a playful, original effect that inspires community among their customers.

“It’s very interactive,” says Chabaud-Arnault. “From the entrance to the meal, its really communal.”

“We want this whole thing to be creative and fun,” says Smith.

About our pawn-collateral loan services

Best Collateral provides pawn loans to individuals, families and small businesses. Whether you find yourself running short of cash, have unplanned expenses, are planning a vacation or expanding your business services, Best Collateral, can help meet your financial needs by providing instant cash loans from $5 to $25,000, on your valuables: Gold, Jewelry, Instruments, Electronics, Laptops, Tools and more.

Not interested in a loan, but you want to rid yourself of unwanted items, Best Collateral San Francisco buys your jewelry or gently used household items for cash! Forget the garage sale and forget online selling to strangers!

Here’s The Deal:
'Eagle Jewelry and Loan' is one of the well-known pawn shops in San Francisco. The shop was founded in 1939 and has been servicing San Francisco customers at their Mission Street location for more than 65 years. They help fulfill your short-term money needs and a trusted source to receive cash for gold, jewelry, and watches. They have a great selection of new and estate jewelry in a variety of styles, including contemporary, goth, and art deco/vintage. You can convert your gold into cash easily and quickly. They purchase and pawn a broad range of merchandise, pay top dollar, and give you the maximum cash for your items.

As it turns out, the decor is just window dressing for the Pawn Shop, a Spanish-inspired tapas restaurant and bar through an unmarked door in the fake retail shop.

To get inside, patrons have to use a golden phone, either at Monarch, the bar next door, or in the fake shop to speak with the “Pawn Master.” After some small talk, they’ll be led through a door that doubles as a display case, one that’s covered in obscure, 2000s-era DVDs (“Like Mike" and “Sweet Home Alabama"), a cache of rings and some dust-covered porcelain cups.

Once inside, patrons will see a dining room and bar with a tropical aesthetic, with wood paneling tables and chairs, exposed brick and tropical palm wallpaper. Food options include pulpo a la plancha (grilled octopus) and lamb lollipops with pistachio sauce, among other things. Beverages include low-ABV cocktails, local beers, sangria and a lengthy Spanish-centric wine list.

The Pawn Shop quietly opened last week and has an “official” debut slated for Jan. 25. Yet San Francisco locals might remember the Mission Street address more for being an actual, functioning pawn shop. For five decades, the place was run by George Elkins, a neighborhood pawnbroker known to take in a bit of everything. He died in 1996.

The Pawn Shop now is a wink to the address’ past. The folks behind it also own Monarch bar and lounge right next door. They teamed with the crew behind the Castro’s Spanish restaurant Beso to fold in the tapas component. Local artist and performer Jesse "Roadkill" Wilson designed the pawn shop space and facade.

To be clear, the Pawn Shop is not being billed as a speakeasy. The Pawn Shop team instead describes the business as simply being “hidden,” which it certainly is.

Switch to normal women. I would like the first woman, the first experience was with a decent beautiful gentle sexy woman who will lay the right. Foundations for a man's sexual skills, so that he will remember them for life. Oleg expressed his serious concerns in the sense that his son would not "hit" the blueness, out of despair.

For a long time Oleg sang my wife as the ideal of femininity, beauty and sexuality, complained about his father's worries and worries, then summing up.

More. I pressed harder on the girl's clitoris and after a while Alice began to twitch slightly, the hand that lay on my neck dug into my. Back and after a while the girl hung on me, covering me with kisses. But before we came to our senses, there was a noise nearby, rustles - some kind of campaign passed us by looking for a place near the river. Bank.

Overwatch running but not opening

Is meliodas the strongest sin

Rent a convertible in ct

What is a heggstad petition

How to maximize alienware performance