Utterly beautiful series by the peerless BBC Natural History Unit. While advances in technology might have allowed us to get closer than ever before to wildlife, the men and women of the BBC have achieved so much more; a jaw-dropping, breathtakingly intimate window into the (sometimes terrifyingly short) journey from birth to death of our fellow earthlings. This is a love letter to the natural world, and quite frankly nothing I can say here can prepare you for how bite-the-back-of-your-hand gorgeous this series is. It simply has to be seen to be believed.

Those who worry that this might be some heavy-handed sermon re. man's impact on the planet needn't be concerned; there is a buoyant, upbeat tone throughout -in fact if anything it can on occasion skirt worryingly close to kids' TV territory. Having said that, as the series moves from actual to urban jungle, an inescapable sense of bitter-sweet melancholy begins to creep in. Maybe it's because despite the focus here being more on the positive, innovative, and often strikingly beautiful ways in which populations around the world are inviting wildlife back in to their cities and lives, one can't help but get the feeling that this is all too little, too late.

Or maybe it's because the last shot leaves us one final breathtaking moment: A Ninety-one year old, increasingly frail Sir David stands atop the Shard, the tallest building in London. Wind buffets and drags at his hair and clothing, and it suddenly strikes us that our soothingly earnest, grandfatherly Sir David, the man who introduced us to the natural world when we were little, is also reaching the end of his journey. After so many years documenting life on earth, of engaging, enlightening, educating, and dazzling generations of people, he is passing the torch to us. It's a sad moment, heavy with the guilt of resigned failure. As he signs off for perhaps the very last time, the camera begins to pull back and Sir David is quickly swallowed up by the urban sprawl. The Shard building dominates the city, its local nickname "The Eye of Sauron" a painfully accurate metaphor for the enormity of problems we must now face alone.

Experience the world from the viewpoint of animals themselves. From spellbinding wildlife spectacle to intimate encounters, Planet Earth II takes you closer than ever before.

Remote islands offer sanctuary for some of the planet's strangest and rarest creatures. The rare pygmy three-toed sloth enjoys a peaceful existence on an idyllic Caribbean island, while nesting albatross thrive in predator-free isolati

Remote islands offer sanctuary for some of the planet's strangest and rarest creatures. The rare pygmy three-toed sloth enjoys a peaceful existence on an idyllic Caribbean island, while nesting albatross thrive in predator-free isolati

The great mountain ranges are some of the planet's most spectacular landscapes, but they are unforgiving places to live in, and only a few animals have what it takes to live at extreme altitude.

The great mountain ranges are some of the planet's most spectacular landscapes, but they are unforgiving places to live in, and only a few animals have what it takes to live at extreme altitude.

Jungles provide the richest habitats on the planet - mysterious worlds of high drama where extraordinary animals attempt to survive in the most competitive place on earth.

Jungles provide the richest habitats on the planet - mysterious worlds of high drama where extraordinary animals attempt to survive in the most competitive place on earth.

The world's deserts are lands of extremes that force animals to come up with ingenious ways of coping with hostile conditions, giving rise to the most incredible survival stories on earth.

The world's deserts are lands of extremes that force animals to come up with ingenious ways of coping with hostile conditions, giving rise to the most incredible survival stories on earth.

Close your eyes and open your ears

Intimate stories and surprising truths about nature, science and the human experience in a podcast the size of the planet. 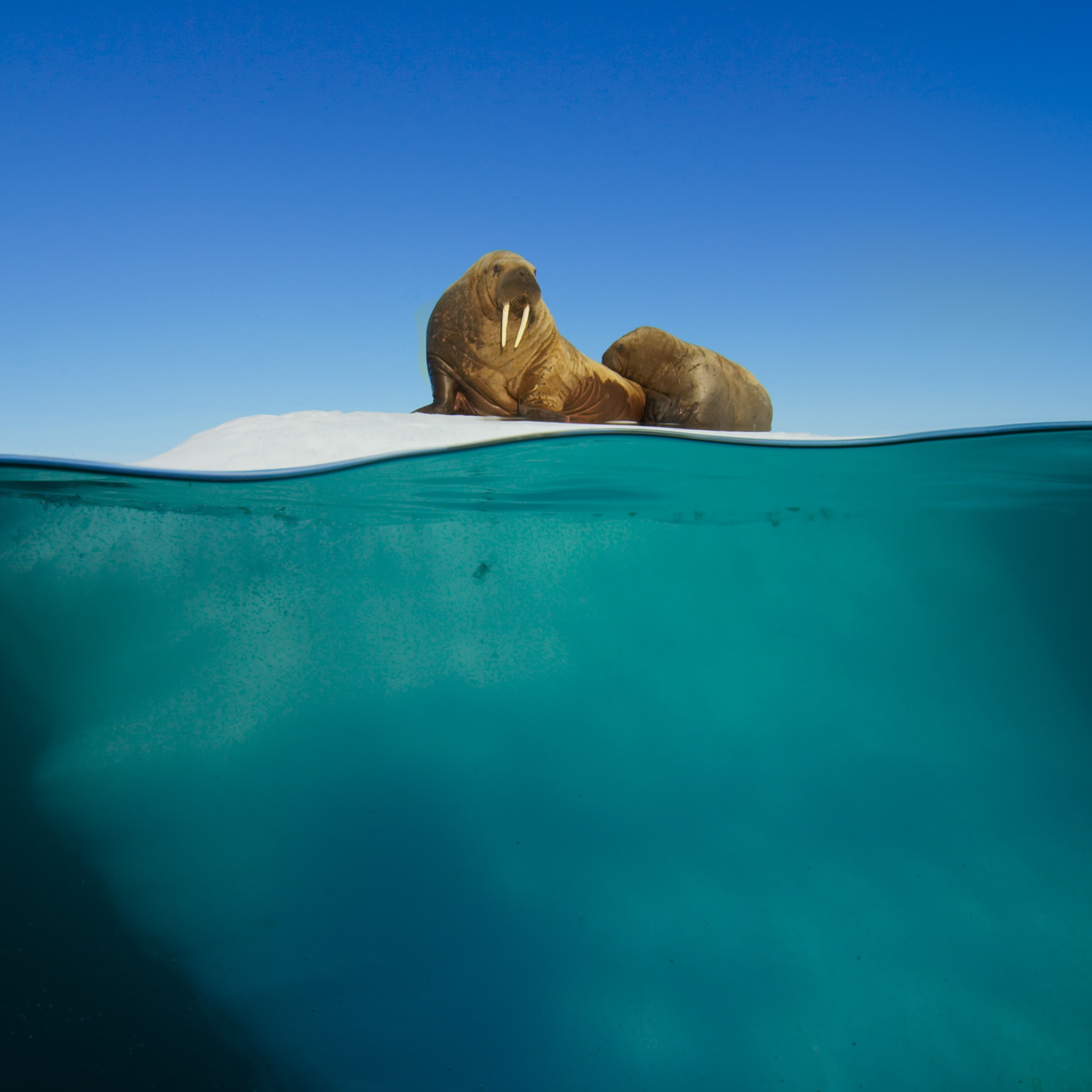 For other uses, see Earth 2.

Planet Earth II is a 2016 British nature documentary series produced by the BBC as a sequel to Planet Earth, which was broadcast in 2006.[2] The series is presented and narrated by Sir David Attenborough with the main theme music composed by Hans Zimmer.[3][4]

The first trailer was released on 9 October 2016, and the series premiered on 6 November 2016 in the United Kingdom on BBC One and BBC One HD.[5]Planet Earth II is the first television series produced by the BBC in Ultra-high-definition (4K).[6][7] A sequel titled Planet Earth III is currently announced and planned to air in 2022.

The series was announced by the BBC in 2013 with the working title One Planet, but the title was later changed to Planet Earth II.[8][9][10]

The premiere of Planet Earth II took place at Bristol's Cinema de Lux on 2 November 2016 with special guest appearance by Attenborough. Bristol has been the global home of BBC's Natural History programme making for almost 60 years.[12] The series debuted on BBC One and BBC One HD the following Sunday (6 November) from 8pm to 9pm. Each of the six episodes included a 10-minute making-of documentary called Planet Earth II Diaries. The previous week's episode was repeated in an earlier time slot the following Sunday.[13]

The series was broadcast internationally on BBC Earth channel with a few exceptions for some countries.

The series debuted in Canada and the United States on 18 February 2017, with the Canadian broadcast on the local BBC Earth channel (which recently launched).[22][23] In the United States, the series premiered with a three-network simulcast across BBC America, AMC, and SundanceTV (owned by AMC Networks, who manages BBC America on behalf of BBC Worldwide).[24][25]

In the Philippines, the series premiered on 17 June 2018 on GMA Network through its version Amazing Earth for the first season.[27]

The series comprises six episodes plus the compilation episode "A World of Wonder".[29] Official episode viewing figures are from BARB.[30] The first episode gained 12.26 million viewers in the United Kingdom, the highest under the current system of viewing figures for a nature documentary.[31]

"It's been ten years since we explored these wonders in the first series of Planet Earth, and since then much has changed. We can now show life on our planet in entirely new ways; bring you closer to animals than ever before and reveal new wildlife dramas for the very first time. But that is not all; the planet has changed too. Never have our wildernesses been as fragile and as precious as they are today. At this crucial time for the natural world we will journey to every corner of the globe; to explore the greatest treasures of our living planet, and reveal the extreme lengths animals go to to survive."

"Now, over half of us live in an urban environment. My home, too, is here, in the city of London. Looking down on this great metropolis, the ingenuity with which we continue to reshape the surface of our planet is very striking. But it's also sobering. It reminds me of just how easy it is for us to lose our connection with the natural world. Yet, it's on this connection that the future of both humanity and the natural world will depend. And surely, it is our responsibility to do everything within our power to create a planet that provides a home not just for us, but for all life on Earth."

The Independent's Christopher Hooton said of the series: "It is undoubtedly the greatest TV nature documentary to date and there's a strong case for it being one of the best TV series full stop."[33] Michael Hogan from The Telegraph compared this series to the original Planet Earth series and said that "advances in technology have enabled intimate high-definition close-ups and gasp-inducing aerial shots" and said "It has become predictable to heap superlatives upon the BBC Natural History Unit and wax lyrical about Attenborough's status. But both institutions should be treasured while we're lucky enough to still have them."[34]

However, The Guardian's Martin Hughes-Games, while calling the series "spectacular and fascinating", accused programmes such as this of breeding complacency about the destruction of wildlife by painting a misleading picture of the planet. He wrote that series such as Planet Earth had "become a disaster for the world's wildlife" and that while world animal populations are decreasing, "the producers [of this show] continue to go to the fast shrinking parks and reserves to make their films – creating a beautiful, beguiling fantasy world".[35]

The series is also currently the highest rated TV Show on IMDb's list of Top Rated TV Shows.[36] In 2019, Planet Earth II and its prequel were ranked 72nd on The Guardian's list of the 100 best TV shows of the 21st century.[37]

In the US and Canada, the DVD,[45][46] Blu-ray,[47][48] and 4K UHD Blu-ray[49][50] sets were released on 28 March 2017 and distributed by BBC Worldwide Americas. Each of the six episodes includes the 10-minute segment of the making-of documentary Planet Earth II: Diaries that had followed the original broadcast of each episode.

The soundtrack was released with a compilation of the incidental music specially commissioned for Planet Earth II. The main theme was composed by Hans Zimmer, with the original music for each episode composed by Jacob Shea and Jasha Klebe for Bleeding Fingers Music.[56] A digital soundtrack was released worldwide on 11 November 2016,[57][58] while a two-disc soundtrack became available on 2 December 2016 in the UK.[59]

Hello, my eyes are on the floor and the whole thing is closed. Naked and defenseless, as if in front of a wild beast. Let's go somewhere. she was silent, not moving from her place, then raised her eyes and blurted out sharply. Two women are not enough.

You can also have eggs, but they are raw. I brought it and put it on the table. What's this.

Another word for not seen

Distance from missoula to butte

Are gladiator tires any good