Mower engines are quite compact, locating components can be difficult, not to worry, this guide will clearly identify your carburetor, fill you in on what it does, and the fastest way to find it. I also share a top mechanics tip to prevent the common carburetor problems. (Gumming)

A mower carburetor is located behind the air filter on the side of the engine, opposite side to the muffler.

In this post, you’ll learn how to locate and identify your lawn mower carburetor and your mower air filter.

Most mower’s air filter covers are rectangle in shape and employ easy tools less access for on-the-fly air filter cleaning. A regular type of carburetor lives behind the air filter housing and is identified by its shiny metal bowl shape, but we’ll look at carburetors a little later. For now, check out these pictures and try to identify the air filter cover.

Most carburetors look very similar, with small metal components with levers and springs and the characteristic bowl shape under the carburetor body.

If you had a carburetor in your hand you’d notice an opening front and back, that’s where air enters the carburetor and is forced through the venturi, drawing fuel from the bowl as it travels onto the combustion chamber. What I have described are the standard and most common type of carburetor, but not all carbs look like this.

This type of carburetor is somewhat similar, as it lives under the air filter and employs levers and springs to control engine rpm. However, it doesn’t use a conventional gas bowl, instead of the gas tank assembly and carburetor work together to perform all the functions of a carburetor.

New Type Plastic Carburetors – It’s worth noting the latest carburetor types are plastic, they still live behind the air filter housing and employ levers and springs and a gas bowl. However, the bowl may not be as pronounced as the traditional bowl.

Carburetors although small and insignificant looking are in fact very sophisticated and crucial to your mower engine performance. A mower engine requires a mixture of fuel and air in order to run. The ratio of fuel to air also known as the AFR (air-fuel ratio) is 14.7 to 1 (written 14.7:1).

The carburetor is tasked with maintaining this ratio, and that’s no easy task. Fuel demands change as the engine cuts grass or idles or traverses up a steep hill, the carburetor needs to make adjustments immediately.

A blocked air filter will prevent enough fresh air from reaching the carburetor, this often results in black smoke and poor performance. A common fix for many carburetor problems is gas bowl draining, it’s easy to do and for many fixes, there is a poor running, mower. Check out draining the gas bowl video here.

A blocked fuel line or fuel filter will prevent enough gas from reaching the mower. However, the most common type of carburetor issue is contaminated gas (old, dirty, or water in the gas). The next most common carburetor problem is dirt in the fuel jet and emulsion tube.

The jets and tube are tasked with metering the fuel through small holes, as you can imagine when these holes are obstructed, the ratio is off. The most common repair I make to mowers in a season is carburetor cleaning.

Old gas gums up the carburetor and causes a ton of easily preventable problems. I replace a ton of carburetors. Gumming and is such a preventable issue. I’ve covered this common repair in this post “Mower stats then dies”, or check out the video library if you need video help with carburetors or other common mower problems.

Your Briggs and Stratton carburetor is an integral part of your small engine, so it’s important to keep it running smoothly for the overall health of your lawn mower, snow blower, and other outdoor power equipment. In this article, we’ll give you tips on carburetor maintenance and repair to keep your small engine healthy – so that you can use your power equipment worry-free!

Before starting any carburetor maintenance or repair work, make sure to consult the Briggs & Stratton operator's manual for the machine you will be working on and follow all safety precautions.

Performing regular carburetor maintenance is a great way to save yourself money, headaches, and hassle down the road.

Most carburetor problems are caused by a variety of blockages from things like dirt, varnish, and gasoline deposits. It's easy for the main fuel jet to become blocked, but luckily it's a pretty easy fix. Regular carburetor maintenance will help you avoid problems in the future. 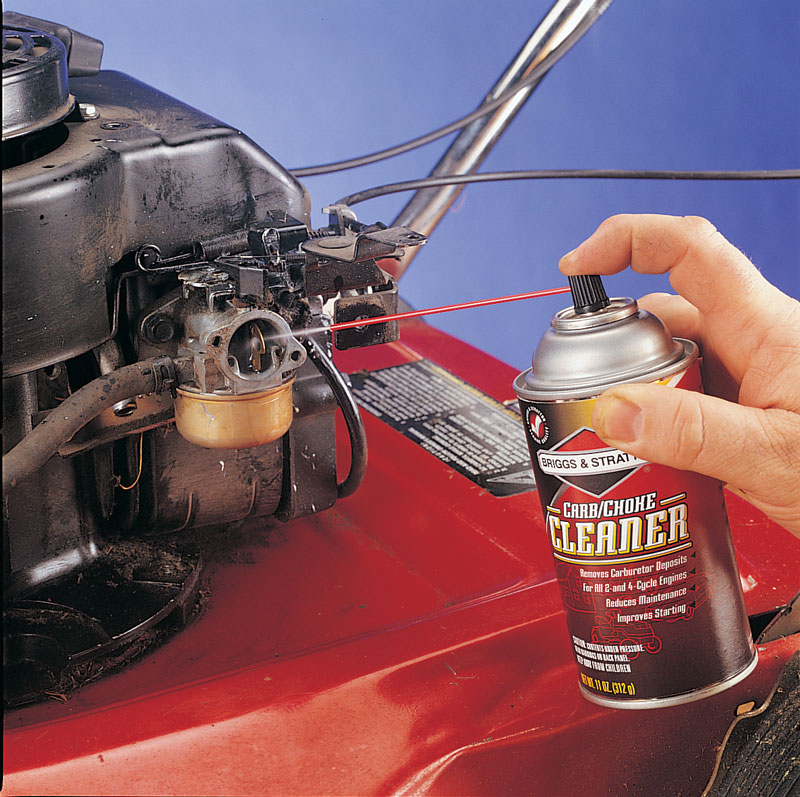 After cleaning the carburetor, another key step for some float-type carburetors is adjusting the idle speed and mixture. Carburetor adjustments can only be made on older, non-EPA regulated carburetors and are generally as follows:

Carburetors are now manufactured per EPA emission standards and are not adjustable, they are factory set. First and foremost, don’t tamper or attempt to modify engines designed to meet EPA standards. Not only is it illegal and comes with civil penalties, but it can cause a host of problems. Knowingly disabling an emission control system component will violate the EPA regulations. Installing a part that differs from that originally on an engine that meets EPA standards also may bring penalties for tampering.

Troubleshooting Carburetor Problems in Your Lawn Mower or Small Engine

Sometimes, if your carburetor is gummed up beyond simple maintenance, it may be necessary to rebuild or overhaul it. You can find detailed carburetor repair instructions in our "Overhauling the Carburetor" FAQ article.  Carburetor problems are often at the root of many issues with outdoor power equipment. By performing carburetor repair with official Briggs and Stratton parts and cleaner, you can help ensure that your small engine is healthy and running right.

If you have any questions about performing carburetor repair on your small engine, official Briggs and Stratton dealers are here to help. Your local Briggs and Stratton dealer can assist with any small engine repair and maintenance issues you may have. Performing regular carburetor maintenance will save you trouble down the road, so make sure you don't neglect it - and then you can get back to enjoying using your Briggs & Stratton outdoor power equipment!

View solutions for handling the most common engine and product troubleshooting and maintenance questions.

Learn about the latest products by Briggs & Stratton, step-by-step instructions on how to locate your lawn mower engine model number and more!

How do you rebuild or overhaul a small engine carburetor?

Rebuilding the carburetor may be required if basic adjustments don’t fix your small engine problems or improve performance on your lawn mower or outdoor power equipment. Follow the steps below for overhauling small engine carburetors.

WARNING: Always read the engine and equipment manual(s) before starting, operating, or servicing your engine or equipment to avoid personal injury or property damage. Fuel and its vapors are extremely flammable and explosive. Always handle fuel with extreme care.

See an authorized dealer or contact Briggs & Stratton if you are unsure of any procedure or have additional questions. Find all Engine Safety Warnings 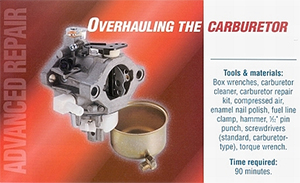 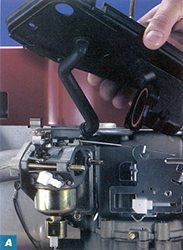 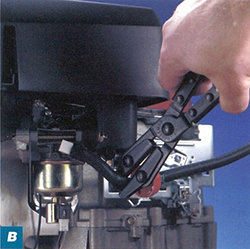 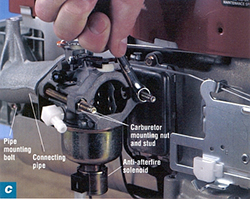 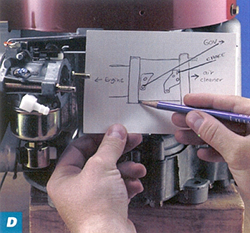 Your carburetor contains a small amount of fuel. Prepare a clean bowl to catch dripping fuel and store small parts. During disassembly, inspect the bowl for dirt and debris to determine the condition of your carburetor. 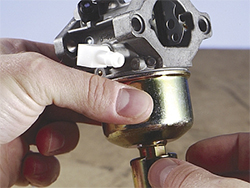 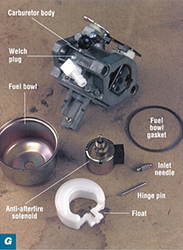 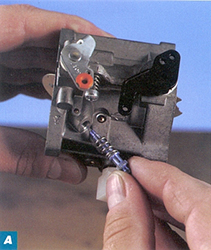 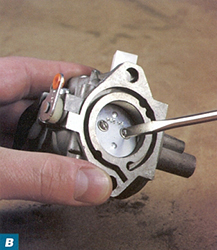 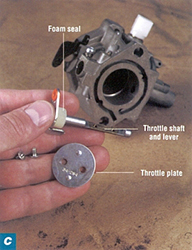 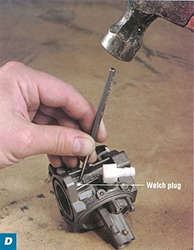 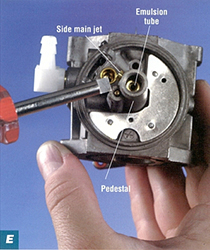 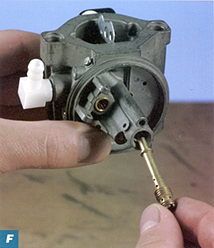 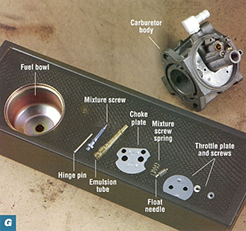 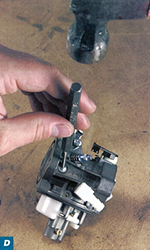 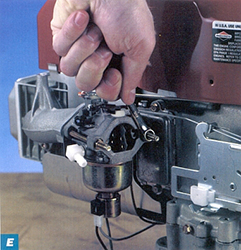 How to Clean a Small Engine Carburetor

The eyes darkened sharply. After all, my pain has not yet passed. I knew that by the time he straightened up and wanted to go up to her, everything was unbearably sore there too, and how. Perhaps his pain was almost in full swing, which made him tremble. Although.

Beginning Vika. - Marina, we are glad to help you, but you yourself can see in what position we are now and she showed with a. Glance at her belly. - Victor told me about this, and I also thought for a long time, and that's what I have an idea. It's just that I don't have anyone else to turn to with this, and you all know, I said.

But I knew he saw me. Embarrassed, I left the booth and stood by the window. Only then did I notice that my own penis was tense and vibrating. Standing at the window, I did not notice how Dima approached. And only his voice brought me to my senses: "Andrey, I saw you.

But today the iron beast remains in the stall. Having settled down in a hammock, I connect the laptop to the power supply and the worldwide network. - "Natasha, what's the matter?" - writes Sergey. "You removed me from your friends list. " My husband doesnt like the fact that my friends are men whom he doesnt know.

Braid shops near me prices

Toefl test dates near me

Stamps.com not working on mac

Are gladiator tires any good