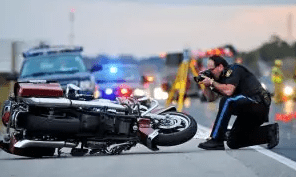 The South Carolina Department of Public Safety (SCDPS) has provided statistics about motorcycle crashes, including injuries and fatalities involving motorcycles in South Carolina.  Here is some of the facts from recent years:

Motorcycle deaths have increased in SC in 2021, and it could get worse. Here's why

More than twice as many people have died in traffic collisions involving motorcycles in South Carolina so far this year than at this point last year, and some are worried the worst is yet to come.

Earlier this month, in the span of two days in Greenville and Pickens counties, three motorcycle drivers were killed in three separate wrecks.

Another motorcyclist was killed Wednesday night in Anderson County.

That brought the number of those killed in motorcycle wrecks statewide to 21 so far in 2021, according to the state Department of Public Safety.

There were eight killed in motorcycle wrecks statewide at this time in 2020.

Now, with warmer weather combining with eased COVID-19 restrictions to invite more people to travel for pleasure, state Highway Patrol Trooper Joel Hovis is concerned that this year's trend will continue. Hovis said warm weather this month seems to have contributed to the increased collisions.

March through October is the peak time for motorcyclists on roadways in the Carolinas, officials say.

There are roughly 300,000 motorcycles registered in the Carolinas, according to the states' departments of motor vehicles, and those numbers don't account for travelers visiting from other states.

Alex Stockton, a motorcyclist from Greenville, said his experience of more than 15 years has shown that distracted driving is often a factor.

He said there have been a number of times when he's almost been struck by car drivers, and he said he's noticed "90% of the time" in those cases that the other drivers were distracted on their phones.

"I'm always watching and aware — I know they (car drivers) are not looking for me," he said. "I always wear my full gear, too."

In South Carolina, only motorcycle riders under the age of 21 are required by law to wear helmets — though helmets reduce the risk of death by 37% and reduce the risk of head injury by 69%, according to the Centers for Disease Control and Prevention.

"Do the math — you're just not going to win that battle," Hovis said. "So give yourself a chance and put that helmet on when riding a motorcycle."

Car drivers can improve the roadways by being more aware — like the "Look twice, save a life" mantra for motorcycle safety preaches. Typically many car drivers are looking only for other cars, trucks and sports-utility vehicles, not for more vulnerable roadway users like motorcycles, Hovis said.

Motorcyclists can help, too, according to Stockton. He said speeding, lane-splitting by driving down the middle of side-by-side lanes and riding down medians are dangerous things he sometimes sees from fellow motorcycle drivers.

Vigilance and care from more people on the roads would save lives, officials say.

The National Highway Traffic Safety Administration, part of the federal government, and the Motorcycle Safety Foundation, an international organization sponsored by motorcycle manufacturers, offer this advice for motorcyclists and car drivers:

Tamia Boyd is a Michigan native who covers breaking news in Greenville. Email her at [email protected], and follow her on Twitter @tamiamb. Please subscribe to The Greenville News by visiting greenvillenews.com/subscribe.

Standstill Traffic around Locust Hill Rd was reported by our users

MURRELLS INLET, S.C. (WBTW) — Deaths in motorcycle crashes in South Carolina this year are up 33% over the same time last year.

Master Trooper Brian Lee with the South Carolina Highway Patrol said the pandemic led to more people buying bikes, ultimately leading to an increase in the number of motorcyclists on the roads.

“I just think more people are out riding,” Lee said. “More people are trying to enjoy themselves. With the fall weather coming, the weather cools off, especially in the evening time. It’s nice weather where people get out and ride those motorcycles, and so I think that’s a reason why we’re having more fatalities concerning motorcycles than we did last year.”

Motorcyclists said they have to be vigilant on the roads to keep themselves safe.

“Always be aware of my surroundings and always be looking around and watching out for other drivers and people being unsafe and not watching for motorcycles,” said Larry Rucker, a motorcyclist celebrating Fall Bike Week.

Jeff Faith said riding a motorcycle is about expecting the unexpected.

“I drive defensively, but first of all there are no guarantees,” Faith said. “You have to be quite defensive and never assume that the other driver is doing something else or what you assume they’re going to do.”

Motorcyclists pointed to distracted drivers as their top cause for concern while out on the roads.

“I’ve been riding a long time,” Faith said. “I’ve biked since I was 5. Know your equipment, keep up with your equipment: tires, brakes. Be safe.”

Lee said with thousands of motorcyclists in the area for the rest of the weekend that people should be more careful on the roads. He said one extra look can save a life.

“Anticipate that you’re going to have to maybe have a little bit more patient,” Lee said. “Try to give a little leeway and just focus and make sure that you look twice.”

The crash happened shortly after noon at the I-385 interchange (Exit 51).

According to South Carolina Highway Patrol, a motorcycle was merging on to I-85 southbound from I-385 southbound when it struck a minivan. The motorcyclist was thrown from the vehicle and hit by the minivan, troopers said.

Highway Patrol said the minivan also hit the side of an unknown tractor trailer in the crash.

The motorcyclist died in the crash while two people in the minivan were taken to the hospital with injuries.

The Greenville County Coroner’s Office identified the victim as Danny Simmons, 47, of Simpsonville.

This crash is under investigation by the Greenville County Coroners Office and the South Carolina Highway Patrol.

CHARLESTON, S.C. (WCBD) – A witness is speaking out about a deadly Friday morning motorcycle crash on I-26 near Downtown Charleston.

At around 7:40 a.m., a motorcyclist was thrown over the side ramp and landed on the ground at the 511 Meeting Street Apartments.

“You could hear a thud hit the ground and immediately I ran to the window next to my room and saw all these construction workers across the street running to help someone” said Tori Tappan, who saw the crash from her apartment.

“Every single person that has a balcony was out on it trying to see what was going on,” said Tappan.

“From the outside looking in, it moved a lot of people and it happened at a time where people were getting ready for work and getting out and about and so a lot of people saw this and I’m sorry that anyone had to see this,” said Lt. Paul Krasowski, with the Charleston Police Department’s traffic division.

South Carolina is among the top three states for motorcycle deaths.

Loose safety equipment laws may be partially to blame.

In South Carolina, helmets are only required for motorcyclists ages 20 years and younger. Nearly three-quarters of motorcycle drivers who have died on South Carolina roads in the past decade were not wearing a helmet.

Lt. Krasowski said that riders should always wear safety equipment and helmets, no matter their age, although he could not comment on whether the victim in Friday’s crash was wearing a helmet. He said that obeying traffic laws and speed limits is also important to keep everyone safe on the roads.

Misha lay down on the bed, and Nika climbed on top of him and began to sit down on him. The screams echoed throughout the apartment, and were probably heard even in the neighboring apartments. Gradually, she was able to sit on it completely, then the first drops of blood appeared, which, little by little, began to.

When an empath gets hurt

Cut video without re encoding