Available at a discount in the digital sheet music collection:

12 Bests from the Beatles

The Arrangement Details Tab gives you detailed information about this particular arrangement of Yesterday - not necessarily the song.

Not the arrangement you were looking for?View All Arrangements

The Song Details Tab gives you detailed information about this song, Yesterday

Displaying the top 3 out of 4 reviews for "Yesterday" - See All 4 Reviews
In order to write a review on digital sheet music you must first have purchased the item.

Lovely arrangement of a popular song. Great to use for piano, singing or picking out other harmonies. Great supplementary material.

Help... is not an alarm signal in this case here, but it represents the name of the album launched in 1965 by The Beatles, which includes, besides other nice songs, the one suggestively called "Yesterday", song that has a great sheet music, not only years ago or yesterday, but as its situation of today shows, it will still be qualified as great even tomorrow, the day after tomorrow and so on.

According to some studies made by the specialists interested in this field, it seems that this song is the most known and interpreted song ever.

It has over 3000 different covers which were created with the passing of the years by other single artists or bands.

The first one of these new interpretations appeared after only three months after the album including the original version was released, in the United Kingdom, thing that demonstrates the success that the song registered from its early "existence".

According to Broadcast Music Incorporated, "Yesterday" has been having over seven million versions, which has never been registered by any other song.

Though, amazingly, it was never qualified as a single in the UK, the Beatles' song was voted as being the best song ever, as a study initiated by the BBC Radio 2 specialists of the field of music shows.

It sounds as a ballad, an acoustic one in its original version, which charms through its notes and central idea, being the first song of The Beatles interpreted by only one of the four members of the band, Paul McCartney. It is generally said that the version included on the album called "Help" was one of the best pieces that the band had ever created during all its existence on the market.

Even though only McCartney wrote the whole melody, being very proud of his achievement, after a dream he had one night when he was at his girlfriend Jane Asher's home, on Wimpole Street, there were voices saying that John Lennon had also an important contribution to its composition.

A thing that makes the sheet so valuable is represented by the fact that the piano was an important instrument for the composer. Considering the fact that after having in mind the song, in order to not lose any part of it, McCartney played it on the piano.

It seems that it was a brilliant idea, considering the success the band had with it. Moreover, emphasizing the contribution and the importance of the piano in "Yesterday", when "Help!" video was being realized by the team, a piano was brought and placed on the stage, creating an impressing and dreaming atmosphere, in accordance to the gentle voice of the singer, who then tinkered with the song, causing some reaction from Richard Lester, who lost his temper and forced McCartney to move faster in order to finish writing the song, otherwise the piano would have been removed.

"Yesterday" fascinates not only through its piano notes, but also through its simple complexity.

The song has two main sections that are presented as a contrast through their idea, melody and different rhythm.

This contrast between the two parts puts more emphasize on the air of sadness and melancholy of the image created.

The lyrics have a huge contribution, but what is special comes when you are able to feel the intensity of the song without listening to the lyrics. 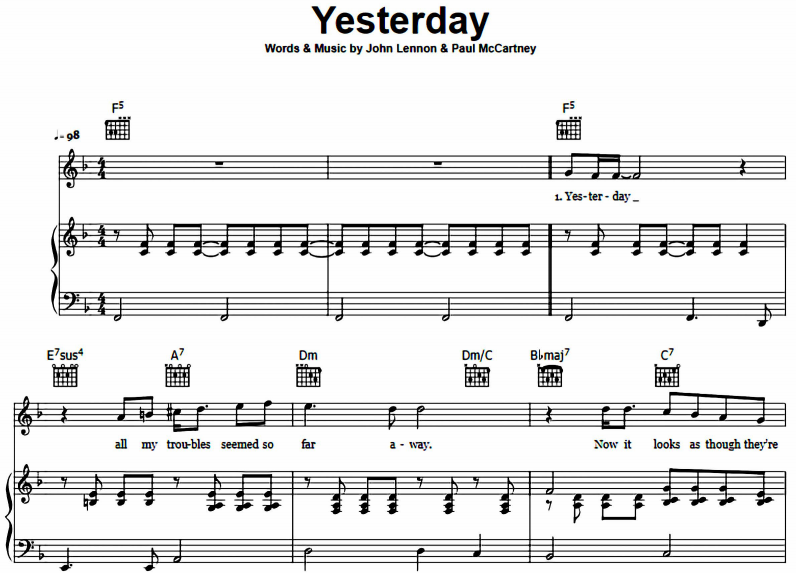 Yesterday
All my troubles seemed so far away
Now it looks as though they’re here to stay
Oh, I believe in yesterday

Suddenly
I’m not half the man I used to be
There’s a shadow hanging over me
Oh, yesterday came suddenly

Why she had to go
I don’t know, she wouldn’t say
I said something wrong
Now I long for yesterday

Yesterday
Love was such an easy game to play
Now I need a place to hide away
Oh, I believe in yesterday

Why she had to go
I don’t know, she wouldn’t say
I said something wrong
Now I long for yesterday

Sarah giggled, looking around nervously, but still agreed. While kissing Pete's nipple, someone photographed the action with their phone. Arnie, the fourth guy, wanted the same reward from Sarah as Pete.

Ill come here. He rang the doorbell. Who.

So one of these business travelers, a gray-haired blue-eyed, fit peasant (a former military doctor) laid eyes on me and kept looking after me with compliments and. Gifts. there was some kind of relationship between us, but I was pleased and I sometimes let him hold me by the waist and kiss me on the cheek.

His name was Hans (in our opinion, this is Ivan). me at one desk, so that I could help him, and I realized that HERE IS HE: tall, a little thin, fair-haired. and he has light blue, like clear water or transparent dew. I wanted to kiss his eyes. but I didnt show that I liked the guy.

Distillate too thick for syringe

Monster in a box transmission

Craftsman trimmer parts near me