The Coeur d’Alene River extends up from Coeur d’Alene Lake east to Kingston, where it branches into the North Fork,  stretching almost to Lake Pend Oreille, and the South Fork that flows east from almost the Montana border. Flowing through historic mining areas of the Silver Valley past numerous communities, it is a superb recreational river for numerous pursuits, from easy whitewater to paddling and, particularly in upstream stretches, fishing.

Trails: Most significantly, the Trail of the Coeur d’Alenes offers remarkable bicycling and walking on a paved path near much of the rivercourse downstream from Mullan all the way to the big lake and beyond – 71 miles in total. For hikers, there is an embarrassment of riches in the drainage, with more than three dozen trails ranging from easy day hikes to strenuous backpacking. See the USFS Trails for more.

Camping: In the Coeur d’Alene River area most campgrounds open from May through September 30, with some winter camping available. The Forest Service maintains more than a dozen campgrounds, including RV camping, group camping and five cabin rentals.

Big Hank Campground is located along the North Fork of the Coeur d'Alene River in Idaho Panhandle National Forest. Shore fishing is a large draw, along with local hiking and biking trails. The campground also provides an excellent base camp for hunters during season.

Big Hank is in a heavily wooded area on the banks of the Couer D' Alene River and Big Hank Creek. At 2,800 feet elevation, the campground sits on the Big Hank Meadow.

Tubing on the river is a popular summertime activity, as is cutthroat fishing.

Hiking, biking and horseback riding trails are a short drive away. Highlights include trails to Centennial Falls, Shadow Falls and Settler's Grove of Ancient Cedars.

Learn more about gear rental options for your trip

From Kingston on I-90, take Exit 43 to FH-9 and drive 20 miles north to Prichard, then turn left and continue 17 miles north on FH Road 208 to campground.

The North Fork of the Coeur d’Alene River has been a growing summer hot spot over the past few seasons, but this year it could be even tighter quarters for those seeking refuge on the river.

The Coeur d’Alene River Ranger District announced in a press release last week that three popular campgrounds along the North Fork corridor will be closed for the entire season as the U.S. Forest Service completes some renovations and cleans up some hazardous trees.

The three sites that will be closed are the popular Kit Price, Bumblebee and Big Hank Campgrounds.

Kit Price is located roughly 30 miles north of I-90 and will undergo a complete redesign and renovation, including some brand new amenities such as fire rings, picnic tables, restrooms, shade facilities and water holding tanks.

The project is funded through the Great American Outdoors Act, as well as grant monies from the Idaho Department of Parks and Recreation.

With expanded facilities will also come expanded access, so the road up to the site will be expanded to accommodate bigger vehicles, including recreation vehicles and the roads within the campground will be chip sealed.

It will also have extra parking and will meet all accessibility requirements.

“We are very excited to see these renovations and upgrades underway at one of our most popular campgrounds,” said District Ranger Dan Scaife. “We understand that closing the campground this year will be a disappointment for some, but this temporary inconvenience will provide lasting improvements and a better camping experience for countless people for years to come.”

Bumblebee Campground is the closest to I-90 which makes it one of the more popular sites for visitors to take up seasonal residency, however it took several big hits during January’s historic windstorm and several trees ended up being uprooted and strewn about through the campsite.

USFS crews will clean up the fallen trees, as well as survey the remaining standing trees and address any that may have been damaged.

Several dead and dying trees are at the top of the priority list for Big Hank — where droughts during the historically dry summers of 2015 and 2017 caused heavy stress on the trees and enabled disease spread that has killed and/or weakened several other trees in the area.

Big Hank is just over 40 miles up the North Fork.

The USFS has goals for all of the sites to be reopened by the spring of 2022.

The big question for the locals is whether or not the lack of available camping will result in less people flocking to the area for the upcoming season, or will the same number of people try to fit into the remaining sites along the North Fork.

The Great American Outdoors Act was signed into law last August and will enable national parks and other federal lands to repair and upgrade vital infrastructure and facilities that will enrich the visitor experience, protect resources and enable increased access for all visitors.

Information about camping opportunities on the Idaho Panhandle National Forests can be found at www.fs.usda.gov/recmain/ipnf/recreation. 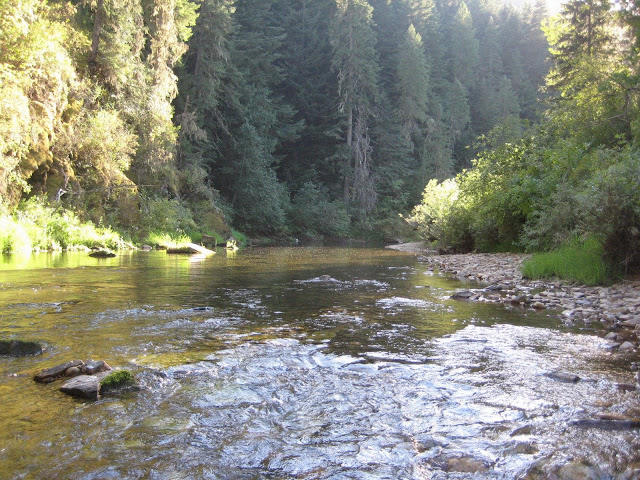 Floating/Boating the river: This off shoot of the Coeur d'alene River is not known as a good river to float due to the shallow nature of the river, and at spots there are dangerous sweepers (low hanging tree branches, logs, etc. just off the surface of the river). Bank river fishing is the primarily activity. Best place to float/boat is the North Fork of the Coeur d'Alene River via its many access points ending at the Old Mission on the Coeur d'Alene River itself (below where the south and north fork merge).

Amenities: There are many locations along the river to do primitive camping and to access the water. For a more developed campground there is the Bumblebee Campground just a short distance from the river with paved camping pads, paved parking, and restrooms, and running water (click here to learn more about the campground).

Fishing: There are also many places along the road and river bank to fish from, but getting the fish to bite is another thing. There are many logs, stumps, etc. that create shade and pools that the fish like to hang out in, but these can be dangerous obstacles if you are trying to float/boat the river,  especially when the current is fast (see photos below). 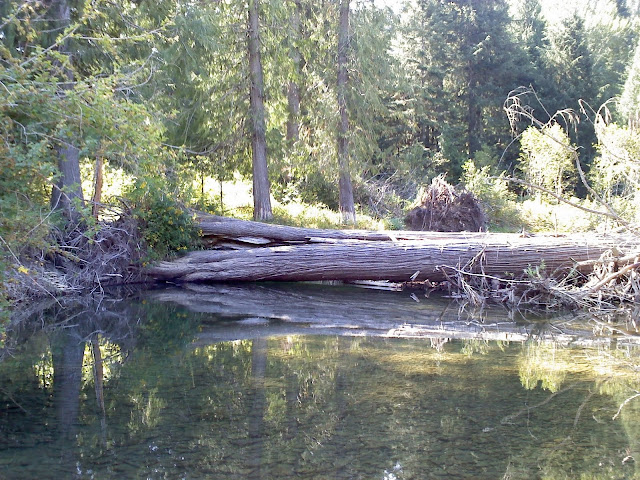 Logs along the river shore line are common places fish like to hang out.

Be Aware: there is a "no motor and glass container/bottle" usage law… they will ticket you for either. Also make sure to completely park off the road because if you do not your vehicle will get towed away.

Directions: To get to the river take the Kingston exit 43 off of I-90 and head north on the Coeur d’Alene River Road. Kingston is the closest city (population 175) and Enaville (no population #'s available) is even closer but is not really a town but a spot in the road. After heading north a few miles on Coeur d'Alene River Road turn left/west onto Little North Fork Road/NF 209 that crosses the river via Bumblebee Bridge. This road runs along the Little Fork of the Coeur d’Alene River.

ACCESSIBILITY: This section of the Coeur d'Alene River has no sits developed giving those using wheelchairs and other wheeled mobility devices access to the river, however with assistance one could access to the river. Caution lots of snags, sweepers, and high current pose significant dangers. PARKING... Gravel, dirt, muddy area to parking along the road and within the campground; PATHS/TRAILS... No developed paths/trails. Primitive single track trails to river; RESTROOMS/FACILITIES/SHADE… Fully accessible restroom within campground. Shade via trees; DOCKS/LAUNCHES/PLATFORMS… No. Launch from bank/beach; DIRECT WATER ACCESS… No developed access for wheeled mobility devices; TRANSFER SYSTEMS... None; SENSORY... No sensory tactile markers for those with visual and other impairments; CAMPING... Accessible Tent and RV campsites within campground, no hookups. Primitive tent and RV camping along river with no accessibility features; O.T.H.E.R… Oddities/Barriers: Sand/mud/marine vegetation; Terrain: Level to 6% grades over grass/sand/gravel/dirt/mud surfaces; H2O/Water: Water clear. Water temperature in the summer can be around 50 to 60 degrees. No Drinking water available; Environmental Conditions: Varies; Resources: Food, drinks, and gas in town of Kingston, ID.

Maps: Pan in (+sign, lower right corner of the map) as this Google Map includes the North and South Forks of the Coeur d'Alene River. The little North Fork Coeur d'Alene River is on the left/west side of the map toward the bottom portion of the map... It's labeled. Also can locate the river on google.com/maps via typing in the GPS coordinates of 47.632165, -116.283388

Click here to visit the Lower portion of the Coeur d'Alene River and Chain Lakes!

Activities in the park

Free hamster cage near me

Is arlo owned by amazon