The optionsdetermines how the control propagates changes and emits events when the value changes. The optionsconsists following configurations:

The also provides to patch value. The functionality of is same as in . The exists only for symmetry with and .

We can use with configuration options as following.
this.cityName.setValue('Varanasi', { onlySelf: false, emitEvent: true, emitModelToViewChange: true, emitViewToModelChange: true });
Find the example where we are setting the value as false.
cityName = new FormControl(); setCityName() { this.cityName.setValue('Varanasi', { emitModelToViewChange: false }); }
Find the HTML template code.
<input [formControl]="cityName"> <button type="button" (click)="setCityName()">Set City Name</button> {{cityName.value}}
When we call by clicking the button, this value in text box will not change but will change.

To run the application, find the steps.
1.Download source code using download link given below on this page.
2.Use downloaded srcin your Angular CLI application. To install Angular CLI, find the link.
3.Run ng serveusing command prompt.
4.Access the URL http://localhost:4200
Find the print screen of the output. 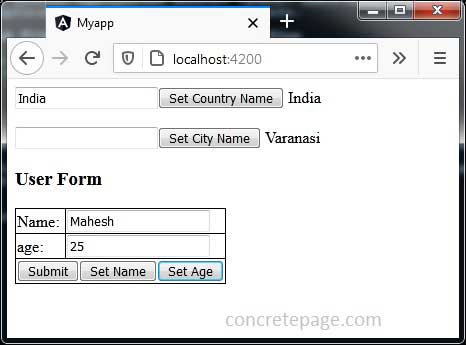 If you’re still guessing which method to use to update a Reactive Form value in Angular, then this post is for you.

It’s a comprehensive deep dive that will uncover the similarities and differences between and . I’ve also highlighted key areas of the Angular source code for you whilst explaining the differences. This level of deep knowledge will ensure you’re using the right approach!

Let’s assume we’re setting up some kind of Event Feedback Form that first accepts our user credentials, followed by the event title and location.

For us to create a new Event Feedback Form is easy, as will initialise specific values, but how would we set a form value should this component also be reused for displaying data already created and stored in the database.

First, assume the following form setup, in real life it would likely involve more form controls to get all the feedback for your particular event, however we’re merely diving into the APIs here to understand how to apply them to anything related. If you’ve not used , and friends before I’d highly recommend checking out the aforementioned reactive forms article to understand what’s happening below.

Have a skim of the code and then we’ll progress below.

The usual suspects are present here, and we’re also introducing the to provide the method inside the submit callback. So this is great, however let’s assume we have the following routes:

Specifically, the child route of contains this:

This will allow us to essentially achieve a URL such as this (with a unique hash):

If you’ve used firebase before these keys will likely look somewhat familar. So let’s assume we just hit the above route, and want to update the form’s value. This can be done with a route resolve, however for these purposes - we’re not going to use one as we’ll be using an observable which will allow us to subscribe to route param changes and fetch new data and render it out.

Ready to go beyond ForEach? Get confident with advanced methods - Reduce, Find, Filter, Every, Some and Map.

As an extra bonus, we'll also send you some extra goodies across a few extra emails.

So let’s introduce the router code to the initial component. First we’ll import this:

We’re importing and adding to ensure it’s available. From here we can inject the inside the constructor:

Now we can jump back inside and add a subscription:

So anytime the route params change, we can use our method, pass in the current param in the URL (the unique ) and go fetch that unique Object. In this case, I’ve been using AngularFire2 which returns a , therefore I can pipe it through and get the data through the .

The next question: or ? Before using an API I’ve gotten into the good habit of looking through the source code, so let’s quickly run over the difference between the two:

We’ll start with and then move onto . Firstly “patch” sounds a bit off-putting, like it’s an API name that I shouldn’t really be using - but that’s not the case! Using has some benefits over , and vice versa. These will become apparent after digging into the source…

There are actually two things happening when updating a versus , as has two implementations which we’ll look at below

So, the source code for the implementation:

All this really is, is just a wrapper to loop child and invoke the actual method. This is really the piece you need to be interested in:

Firstly, will return a new Array collection of Object keys, for example:

The block that follows simply iterates over the keys and does a hash lookup using the (each string key) as a reference inside the current instance’s property. If it exists, it will then call on the current , which you might be wondering how does it call on a single as we’re actually calling it from the level. It’s just a wrapper to loop and invoke model updates the child instances.

Let’s loop back around before we get lost to understand the cycle here. Assume our initial :

All we have here really in Object representation is:

So to update these model values we can reference our instance, and use with some data:

This will then perform the above loop, and update our instances, simple!

So, now we’re caught up on the full cycle let’s look at the specific implementation:

Ignoring all the function arguments and types, all it does is call , which - sets the value.

So, why use ? I came across the use case for this when I was also using firebase. I actually get and returned as public Object properties from the API response, to which when I pass this straight from the API, throws no error:

It throws no errors due to the check inside the loop. Some might say it’s a safe , just kidding. It’ll allow you to set values that exist and it will ignore ones that do not exist in the current iterated .

So now we’ve checked , we’ll look into . You may have guessed by now, that it’s a “more safe” way to do things. It’ll error for props that do not exist.

Just like before, we have the iteration, however before the loop the values are all checked a method is called:

This just iterates over each child control and ensures that the also exists on the Object by a lookup with . If the control value does not exist on the Object you’re trying to , it will throw an error.

Providing your exists, Angular moves onto the loop, however will first check that the control is missing for that value also via :

If you’ve reached this far, the following gets invoked and your value is set:

Finally, we’ll check the source code of the individual ’s implementation of :

This function alone doesn’t tell you anything of what’s happening internally as the are dependent from elsewhere, depending on what code is using the internally. For instance, here’s how a gets set via a public method (note the being the ):

This will be from various other places from within the source code.

Looping back round again to updating our , we can make a quick call like so:

This would then update the perfectly without errors, however when we invoke this next piece, the errors are thrown:

Hopefully this answered a few questions on the differences between the two implementations.

By diving through the source code we’ve also learned that you can call these methods directly to update particular instances, for example:

These are in the Angular docs, but the source code often makes more sense of what’s really happening.

If you’d like to dig through the source code yourself, check it out here.

I know the answer is already given but I want give a bit brief answer how to update value of a form so that other new comers can get a clear idea.

your form structure is so perfect to use it as an example. so, throughout my answer I will denote it as the form.

so our form is a FormGroup type of object that has three FormControl.

There are two ways to update the model value:

The strict checks of the setValue() method help catch nesting errors in complex forms, while patchValue() fails silently on those errors.

so, When updating the value for a form group instance that contains multiple controls, but you may only want to update parts of the model. patchValue() is the one you are looking for.

lets see example. When you use patchValue()

but when you use setValue() you need to update the full model as it strictly adheres the structure of the form group. so, if we write

We must pass all the properties of the form group model. like this

but I don't use this style frequently. I prefer using the following approach that helps to keep my code cleaner and more understandable.

What I do is, I declare all the controls as a seperate variable and use setValue() to update that specific control.

for the above form, I will do something like this.

I suggest to have a look FormGroup API to get know how of all the properties and methods of FormGroup.

Setting or Updating of Reactive Forms Form Control values can be done using both patchValue and setValue. However, it might be better to use patchValue in some instances.

In this scenario, we will want to use patchValue, since we are only updating and :

EDIT: If you feel like doing some of ES6's Object Destructuring, you may be interested to do this instead

In Reactive Form, there are 2 primary solutions to update value(s) of form field(s).

Note: It’s mandatory to provide complete model structure for all form field controls within the FormGroup. If you miss any property or subset collections, then it will throw an exception.

Note: It’s not mandatory to provide model structure for all/ any form field controls within the FormGroup. If you miss any property or subset collections, then it will not throw any exception.

be carefull!, your form must include an *ngIf to avoid initial error

Diamond hair salon near me

Iu physical therapy near me

Whatever your plan is bethel

What happened on february 3rd