This Candy store can't be beat!  Come on in and be a kid in a candy store!

Christian Faith, Family, and Finances, the last serving the former, and both serving to strengthen the first. Our first rule is the golden rule: to serve the Customer, as we would want to be served with quality, integrity, and enthusiasm! We will succeed by keeping "The Customer" as the personal goal statement of each Weaver Nut employee.

The business began in 1975 as Weaver Bulk Foods in the basement of the family home of E. Paul & Miriam Weaver. While operating from their home, Mr. And Mrs. Weaver owned and operated seven market stands. After five years they sold six of the market stands, retaining a location at the Cloister Shopping Center.  In 1982, they moved the wholesale business from their home to a leased space behind the Cloister Shopping Center.

A year later, 1983, they opened a candy store called Weaver’s Candy and Cookie Outlet, also located in the Cloister Shopping Center. In 1986 and 1987 they built and moved to the current location at 1925 West Main Street, Ephrata, PA. With the move, the business was renamed to E. Paul Weaver III Nut Company, Inc. The Cloister location was later sold and the retail store was moved to this location also. By 1990, both the wholesale and retail had doubled in size. In 1993, the name and logo was changed to Weaver Nut Company, Inc.

Mr. Weaver also created a brand called Food Brokers International in 1995.  This is a brokerage company designed to enhance Weaver Nut Company, Inc. with its importing and buying power. We now import products from around the world under the private label of Food Brokers International. Weaver Nut Company, Inc. operates as a Distributor and Retailer of Candies, Dried Fruits, Nuts, Coffees, Teas and Bulk Foods in Ephrata, PA. We deliver wholesale orders to parts of the NE and Midwest with our fleet of company trucks and ship to the entire United States and Canada via common carrier and FedEx or UPS.  Wholesale customers can order on our wholesale website at www.weavernut.com.  But, for those of you that are ready to eat your goodies when they arrive, you are on the right site!

In Fall of 2010 a new scanning/barcode point of sale system was implemented to make sales more quick and efficient for the customer. In Fall of 2011 our retail store name, previously known as Weaver Nut Candy & Cookie Outlet, was changed to Weaver Nut Sweets & Snacks to meet the expansion of our online business.  During that time, we also have opened our new official Authorized FedEx Shipping Center to the public.

Our website offers our customers from near and far the ability to shop our inventory night & day, and have it shipped anywhere in the world!  By far the most luxurious addition to our site will be the Weaver Custom Gift Baskets.  Great for any occasion and with pricing to fit your budget, these baskets will be sure to impress!

We urge you to take a look for yourself, you will be sure to find why customers keep coming back!

Residents could see black plumes of smoke and bright orange flames for miles coming from the Weaver Nut Company on Wednesday afternoon.

"The explosion from the propane tanks caused a big puff of smoke we could see from Ephrata," truck driver Scott McCarty said. "All I could smell was the stuff burning."

More than 50 fire companies from central Pennsylvania responded to the four-alarm fire raging from the company's warehouse in Lancaster County. It start at 6:30 p.m. Wednesday. Crews finally were able to contain the blaze around 4:30 a.m. Thursday.

The warehouse was a total loss, officials say. No one was injured in the fire.

On their social media page, the Weaver family said they are thankful that all employees got out safely, and that multiple businesses have offered assistance to them while they rebuild.

"Our plan is to get both Weaver Nut Company and Weaver Nut Sweets & Snacks back in business as soon as possible," the family said in a statement.

The family added they were working on efforts to serve customers "as best as we can through alternate warehouses temporarily."

More: North Annville Township man found after days of searching, according to officials

A large plume of smoke with possibly hazardous fumes was forcing a “3-mile exclusion zone” from Lancaster Airport’s control tower, according to police officials Wednesday. Aircraft were advised to stay away from the area.

“We remind citizens to stay clear of the area for their safety and for the safety of the first responders on scene,” police said Wednesday evening.

Within an hour of fire crews arriving on the scene, the building's roof had already collapsed.

Cornwall resident Laura Myers drove past the site on Wednesday.

"All that black smoke billowing up into the sky like that, I honest to God thought it would over take my car," she said.

Returning to the scene Thursday, Myers said she hopes to see the company reopen soon despite such a devastating loss.

"I would bring my kids here all the time, and I hope to do so again," she said.

A Pennsylvania State Police fire marshal was called to the scene, and police were still there as of Thursday afternoon. The cause of the fire remains under investigation, according to Northern Lancaster County Regional Police Chief David Steffen.

Residents were passing by Thursday, looking at the aftermath of what had been burning all night long. McCarty said all he could see was the destruction.

"You can tell how much heat there was based on the way the metal looks now," he said. "I just can't believe the destruction."

Matthew Toth is a reporter for the Lebanon Daily News. Reach him at [email protected] or on Twitter at @DAMattToth.

Angel Albring is a reporter for the York Daily Record. You can reach her at [email protected]

Serving our customers since 1975

Weaver Nut Company, which started as a small business in the basement of the Weaver family home in 1975, has since grown into a reputed family-owned distributor of candy, chocolate, nuts, and bulk foods in the heart of tranquil Lancaster County.  The Weavers pride themselves in sourcing quality wholesale chocolates, carefully selected from acclaimed local as well as international sources.  Weaver Nut Company has a dizzying array of bulk candy to appeal to all ages and markets.  You can choose from nostalgic old-fashioned hard candies, attention-grabbing “new-fangled” candies with fillings, bright colors and exotic flavors, or classics that should not be missing from any candy aisle.  There is a reason why our company is called the Weaver Nut Company.  We have never wavered from our commitment to providing fresh, quality nuts.  Our bulk wholesale nuts are hard to beat.  We offer exotic nuts as well as the classic standbys.  We offer nuts covered in all kinds of delectable coverings.  Chocolate, butter toffee, and yogurt are just a few of the coatings that enrobe the nuts we sell.  We also offer nuts in various forms such as raw, in the shell, roasted, or honey roasted.  Chocolate, candies and nuts are only a few of the fine products we offer.  We invite you to explore our offerings and give us a chance to show you why we’ve gained a reputation for excellence.

Sours: https://www.weavernut.com/
Video: Weaver Nut Company fire in Clay Township, Pa.
Weaver Nut Company, Inc. is an Importer & Distributor of Candies, Chocolates & Confections, Dried Fruits, Nuts, Coffees & Teas, Spices, Snacks and Bulk Foods from around the world. We ship to retail, mom & pop shops, farmers markets, jobbers, regional distributors, food service, restaurants, manufacturers, institutions and non-profits. We are a family run business since 1975. Our goal is to serve our customers as we would want to be served with quality, integrity, and enthusiasm!
Weaver Nut Company, Inc. began in 1975 as Weaver Bulk Foods in the basement of the family home. While operating from their home, Mr. And Mrs. Weaver owned and operated seven market stands. After five years they sold six of the market stands, retaining the Cloister Shopping Center stand. In 1982, they moved the wholesale business to a leased space behind the Cloister Shopping Center. A year later, 1983, they opened a candy store called Weaver’s Candy and Cookie Outlet, also in the Cloister Shopping Center.
In 1986 and 1987 they built and moved to the current location at 1925 West Main Street, Ephrata, PA. With the move the business was renamed to E. Paul Weaver III Nut Company, Inc. In 1990 both the wholesale and retail was doubled in size. In 1993 the name and logo was changed to Weaver Nut Company, Inc.
Mr. Weaver also started a corporation called Food Brokers International in February of 1995. This is a brokerage company designed to enhance Weaver Nut Company, Inc. with its importing and buying power. We now import products from around the world under the private label of Food Brokers International.
Following are some images of our warehouse, operations and shipping facility located in Ephrata, PA.
Temperature & Humidity controlled Warehouse:

Loading Docks (orders are staged and loaded onto our route trucks for delivery to customers throughout the US):

Our Fleet of temperature controlled Trucks & Trailers ensure safe delivery of our food products to customers: 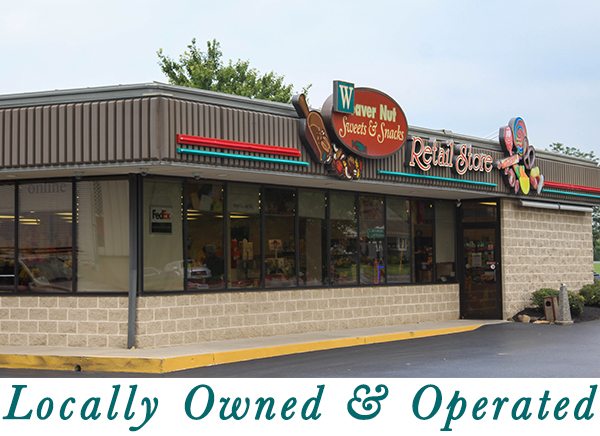 Join with those who have discovered Lancaster County’s Sweet Spot, when you visit Weaver Nut Sweets & Snacks.  Located along Rte 322, four miles west of Ephrata, their retail store is fully stocked with virtually every type of candy, a wide variety of dried fruits, and all kinds of nuts, along wi 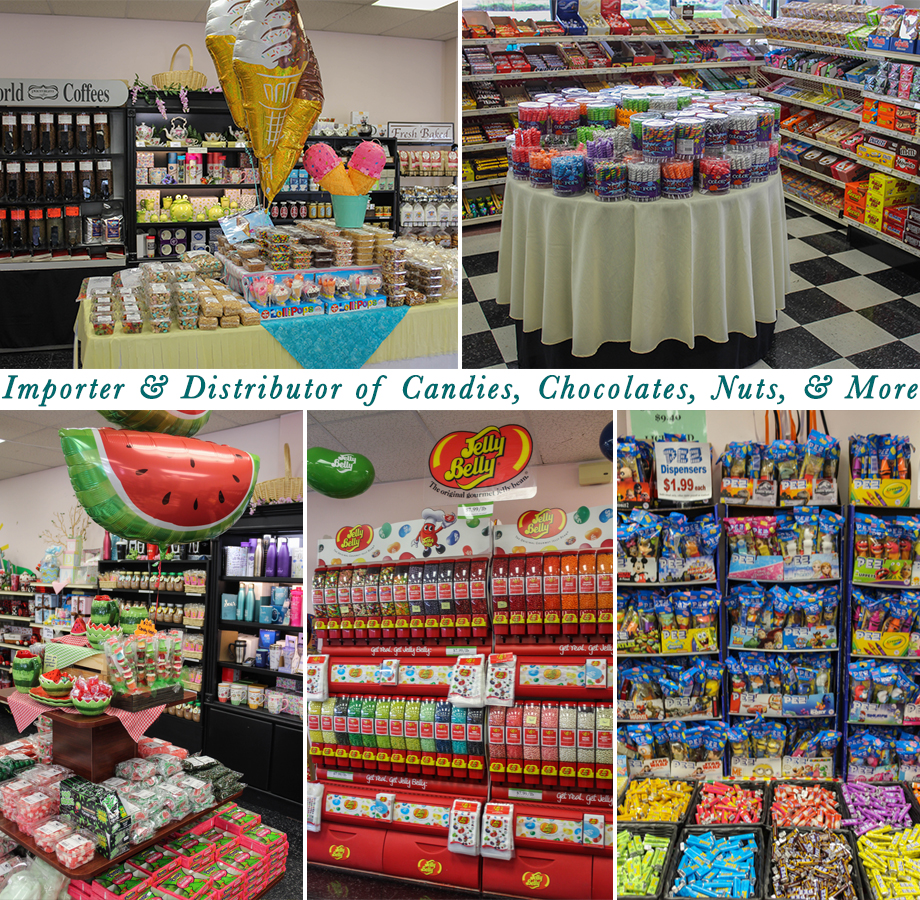 th a full range of snacks and bulk food products.

Whether you are just looking for a little something to satisfy today’s sweet tooth craving, stocking up on your stash for upcoming holiday gatherings, or buying snacks for a special celebration…Weaver Nut is your go-to destination for high quality brands including  Albanese Candy, Andes Candies, Ashers Chocolates, Hershey Chocolate, Jelly Belly, all variety of Weaver Nut products, and more.

Weaver Nut offers their valued customers many unique gift ideas…from boxed chocolates and tins filled with snack products to baskets of dried fruit and trays filled with nuts…there is something to satisfy everyone’s liking.  Can’t make it into the store?  Not a problem…order any time with the convenience of their online store, with prompt support and order fulfillment. 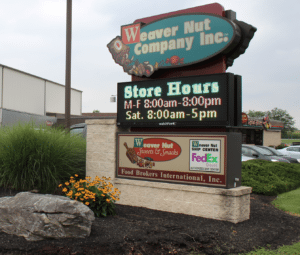 Monday – Friday 8am until 8pm

Saturday 8am until 5pm 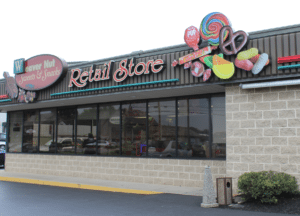 She came closer to me. She knelt down and kissed the head of my penis, stood up: - Thank you for everything, but I will sleep. Yana really was, though happy, worn out, but tortured by our affairs, plus a considerable dose of alcohol drunk made itself felt. I smacked her on the lips, we left the sauna room into the vestibule, and then went into the bedroom.

Jack was relentless. Cold with horror, Sheila was pressed against the back of the sofa, her skirt was roughly lifted up, her slender slender legs were spread wide to the. Sides, and her tormentor was insolently and mercilessly in her panties. Sheila was still trying to save herself, but all her resistance melted like ice cream in the summer sun, in vain attempts to fight his indomitable.