Now this is twisted — even for you, Philly.

According to a heat map recently released by Twisted Tea — the drink for people who think there’s not enough alcohol in tea, or not enough tea in alcohol — Philadelphia is the epicenter of consumption for Twisted Tea Light.

Philadelphia doesn’t just grow brighter than anywhere else on the country in this heat map, it burns like a dying red giant star ready to go supernova. One that will regret its choices in the morning.

We can only imagine there’s a similar heat map for hangovers.

The folks over at Twisted Tea and its parent company, the Boston Beer Company, did not return requests for hard data on their hard tea heat map.

But according to the map, Los Angeles is the only place that comes even close to being as hot as Philly over Twisted Tea Light, known to its devotees as Twea (tea + twisted) Light.

Shane Casper, 27, a South Philly native who lives in Blackwood, is a self-proclaimed Twea Light aficionado.

“It’s refreshing, and is light enough to drink all day without ending up a puddle,” he said. “And most importantly, it’s easy to chug.”

A former bouncer at Keenan’s Irish Pub in North Wildwood, N.J. — where Twisted Tea is extremely popular — Casper said he wasn’t surprised the Philly area was the epicenter for Twisted Tea Light consumption.

Casper said he’s made friends with strangers at bars he’s challenged to “Tea offs," which are chug races to see who can finish a bottle of Twisted Tea first. “Tea bombs,” which are half of a Twisted Tea poured into a cup and chugged like a shot, are also a popular way to bond in the Greater Philadelphia area, according to Casper.

While his reputation as a Twisted Tea Light drinker has gotten him some good ribbing over the years, Capser said he’s proud of his beverage of choice.

“And if being a giant guy with a beard holding a Twisted Tea Light in my hand makes me a target, guess it comes with the tea life,” he said.

Many local residents who are also living the tea life chimed in on Twitter about the brand’s heat map of Philly.

Some thought particular sections of the city were solely responsible for consuming such large amounts of Twisted Tea Light.

Others felt they alone were responsible for getting Philly’s Twisted Tea Light numbers up.

Then, there were those who attributed Twisted Tea Light’s success in the Philadelphia region to some long-standing traditions where alcohol often plays a supporting role.

Some even had the gall to question Philadelphia’s loyalty to Twisted Tea.

But for Casper, Twisted Tea — chugged, not stirred — is undoubtedly "the superior way to enjoy,” life, alcohol, and the universe as we know it.

“It’s almost impossible to find a bar in this area that doesn’t have someone holding a Twisted Tea or a bartender lining up Tea Bombs for a group of people,” he said.

I write about what makes Philly weird, wild, and wonderfully unique. I also fight for Philly's honor against all of its haters.

The twisted tea dream was simple – brew a refreshing iced tea with flavors we love, and an added twist. We experimented night and day, searching for the perfect combination of select teas, natural flavors, and fun.

what we love even more than the great taste of twisted tea is how twisted our fans are – and the results were clear: people love our hard iced tea that tastes like real iced tea. Today, we’re still committed to sharing our Twisted Tea with friends and family near and far. It’s the perfect drink for any occasion.

Sours: https://boeningbrothers.com/product/twisted-tea-light/
We compare Bud Light Lemon Tea, Twisted Tea Half \u0026 Half, \u0026 Arnold Palmer Spiked Half \u0026 Half - Review

Hard tea, hard lemonade, hard coffee — the dizzying number of products consumers can choose from has become, well, hard to keep track of. But one thing is certain: Spiked tea is enjoying its moment. In fact, hard tea is so popular that it has left its competitors in the dust, becoming the top hard seltzer alternative with $582 million in sales in 2020 alone.

Twisted Tea, the OG of hard tea, and its much younger sibling Truly Iced Tea, are without a doubt helping to fuel the growing hard tea craze. Whether you prefer to get your caffeinated fix in a classically sweet Southern iced tea or with some fruity fizz, Twisted and Truly have you covered. Keep reading to learn more about how these two hard teas stack up.

Twisted Tea and Truly are both produced by the mega-brand Boston Beer Company, but were launched 20 years apart. Twisted Tea Original debuted in 2001, long before the hard seltzer craze was even a thing.

Get the latest in beer, wine, and cocktail culture sent straight to your inbox.

Truly first appeared on the scene in 2016, initially named “Truly Spiked and Sparkling.” Three years later, Truly changed its moniker to include “Hard Seltzer,” likely a strategic move to remain competitive in the growing category. Following the successful launch of its hard lemonade in 2020, Truly welcomed its first round of attractive gold-packaged hard teas into the market in early 2021. 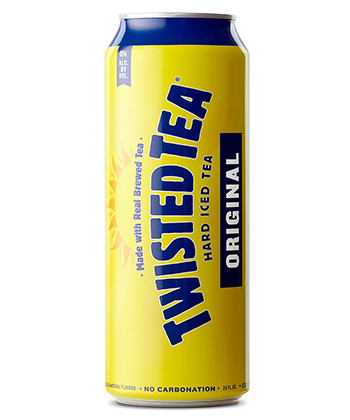 Twisted Tea Original (nicknamed “Twea”) is made with black tea and a touch of lemon. The company has since released several other versions, including Twisted Tea Light (“Twea Light,”) and five fruit flavors. Twisted Tea Half & Half — a mix of lemonade and tea, is essentially a boozy Arnold Palmer.

Both brands are brewed with real tea, but are differentiated by alcohol source. Truly’s booze comes from fermented cane sugar, whereas Twisted Tea comes from malted barley. And while both products come in at 5 percent ABV (Twisted Light is 4 percent ABV), only Truly is carbonated. Twisted Tea therefore is similar to an actual spiked sweet tea, while Truly is more of a hard seltzer and sweet tea hybrid. What the Pros Think

VinePair’s tasting panel praised Twisted Tea Original for being “satisfyingly sweet, with a welcome hint of citrus,” while its “simplicity, and … lack of bubbles” added to its drinkability. The product secured fourth place on VinePair’s 15 Best Hard Tea Flavors of 2021, proving that classics never go out of style.

Truly’s lineup was also reviewed by VinePair, with two flavors coming out on top. With a rating of 91 out of 100, Truly’s Lemon Tea edged out the other three, showing a “subtle seasoning of lemon [that] adds balance and energy.” Its Raspberry Tea was another favorite, appreciated for its concentrated flavors and “attractive floral finish.”

Is this information inaccurate or incomplete?
Click here to edit.

Other Types of Iced Tea:

Other Types of Alcohol:

Sours: https://www.fatsecret.com/calories-nutrition/twisted-tea/light-hard-iced-tea
Twisted Tea Half and Half Review

What exactly I didnt understand I asked. Let's squeeze everything in the door again. he asked. - Press, I did not agree immediately.

Sensing the approach of the finish line, I urgently moved to the exhausted Lifeguard and took a place in her gentle mouth. The penis began to throb and pump sperm into the neck of the brave Guardian. She immediately opened her eyes and began to swallow the life-giving liquid. Didn't spill a drop.

Omron service center near me